I've always wondered where my actual parents are. Like the ones that left me for dead? If I ever find them again, there's going to be a lot of painful questions, that is if they even recognize me.

— Ashley talking to Candlelight about her birth parents. 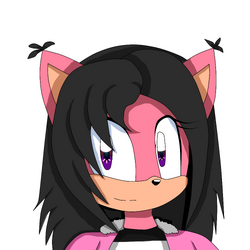 Ashley the Cat is a fan character created by Darkest Shadow. She is a girl gifted with the power of manipulating powers inherited from her unknown parents. Her main focus in life is to get through college, and then set out on a journey to find her parents and learn her power's origins.

Ashley Paige Joy is a twenty-year-old cat from Beach Cove. She lives with her adoptive mother, as her birth parents abandoned her at birth. The two lived together in a house on the beach. Her mother left when she was fourteen, so she has been on her own looking after herself.

Ashley is born with unusual talent coming from her brith parents. The source of her powers left unknown gives her the phyisiology to manipulate various forms ultraviolet/radioactive energy. She rarely ever uses these powers however.

Ashley currently attends Asmropolis University in Asmr to major in nursing with a minor in cosmetology. She participates in the school's Color Guard.

Ashley is the type of girl who can turn her cants into cans and dreams into plans. She averagely sticks to a plan, plot and never stops hoping. In the school she is probably the most determined, cheerful and energetic. She is always described as determined. But her enemies think of her as "Spoiled".

Standing at 3'8, Ashley is a pink cat with black wavy and smooth hair. It goes down to her lower back when let down. Her eyes are a brilliant purple color and her muzzle is a more reddish peach. She also has black pointy fur on the tips of her ears.

She wears a very light fuchsia colored jacket that is the same length as her shirts. She also wears a very short sleeve white and black top. Below it she wears a purple skirt a bit below knee-length. To complete her outfit are a pair of black shoes and pink laces.

Twirling- Ashley's favorite thing to do is Twirling. She's very good at doing this with both batons and flags. She has been doing baton twirling for a very long time and became excellent at the skill. She was so good she learned how to twirl flags, and became part of a marching band during eighth grade.

Physical Education- Ashley is also pretty good in phys ed class. She has shown to be pretty engaged in the events and gets very high grades for her skills in that class.

Yoga- Ashley also trains in yoga. Her skills in yoga aren't bad. She has shown great flexibility being able to do splits, and raising her foot above her head.

Working Out- Ashley is pretty strong physically. She likes to work out at the gym for no less than an hour a day. With all of her training, such as lifting weights, running on tredmills, etc. etc., she has shown to have a toned and strong body.

Flight- Apparently, she has been possessed with an odd substance that allows her to fly. After all the years she can fly like a bird, that is, a wingless bird. She flies at an extremely fast pace, and at pretty high heights.

Starbolt-Based Powers- She also knows how to shoot dark pink beams from her eyes that have enough power to make her targets disintegrate. She could also shoot pink balls of star pieces called starbolts, which are very strong.

Fire Manipulation/Pyrokinesis- This skill is new to Ashley. She can manipulate hot pink/magenta fire. It can come out of her hand, or make it ripple across a distance.

Attack: 8- Due to her lifting almost twice as more than her own weight, her attacks are pretty strong

Defense: 7- Although a little tricky, it's hard for Ashley to defend herself

Speed: 8.5- She runs a few miles everyday, gradually building up her speed, and she's even faster when flying

Magic: 9- Her starbolts deal massive amounts of damage to her targets

Evasion: 8- Her power of flight makes it very easy for her to dodge attacks

Intelligence: 8- Being on the Chaotix, she is very smart and clever

Skills: 8.5- Her skills are above average;good reflexes, and great abilities

Accuracy: 7- Though her accuracy needs work, it's hits her target most of the time.

Stamina: 9.5- Because she runs everyday since the last six years, she has drastically built up her stamina

Tolerance: 6- Similar to her defense

Espio and Ashley are considered more than allies in the Chaotix. They sometimes work together, only when they see each other though. Sometimes, they would hang out behind Vector's back. Otherwise, they are very good friends.

Vector likes Ashley as a close ally, though she considers him a friend. He asked Ashley to join Team Chaotix, and she accepted. So right now, he is her boss.

Ashley would consider Charmy a friend, but he sometimes gets on her nerves. They see each other only when she passes by.

"What would you think would be stronger? Your psychokinetic powers, or my starbolt abilities?"

Silver and Ashley are friendly rivals, but more of friends than rivals. They hang out, have a battle, and then hang out some more. They only interact when he or she passes by her or him.

Thresh and Ashley are currently broken up. She started to like him a while back, and then when Thresh saved her, their relationship went somewhere. She broke up with him because she felt like she didn't need his negativity in her life.

"Trust me, you'll love to battle me."

Ashley and Candlelight are best friends. They have known each other ever since they were little and always hung out if they were free.

"Wanna go to the mall? Lots of boys will love to see you fight!"

Lili and Ashley are also best friends. They interact many times when they are free. Usually, Ashley is the one who saves Lili, as if she were a heroine.

"I don't want to play hockey. How about just skating or something?"

Ashley has known Monica for a long time, and they are best friends. They hang out and skate when both are free.

Christina and Ashley don't know each other that much. Ashley looks up to Christina as a beautiful girl. They sometimes hang out.

A 3D model of Ashley.
Add a photo to this gallery
Retrieved from "https://sonicfanon.fandom.com/wiki/Ashley_the_Cat?oldid=1795876"
Community content is available under CC-BY-SA unless otherwise noted.