Start a Wiki
This is a page about Arturo the Impala, a character owned by XophPsycho

You shall not interfere with my business if you know what is good for you. 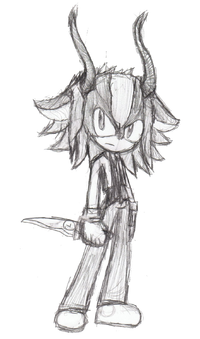 Arturo the Impala is a 19-year-old mercenary/bounty hunter born two thousand years in the future of the Prime Zone after the Genesis Wave. He will make his first appearance in the upcoming Rhyna the Echidna: Dark Flames series.

Arturo is a male Impala standing around 4' 4" with light-brown fur and white accents. His most notable feature are the two curved, dark-brown horns atop his head, which are beside his usually-lowered ears. On his forehead is a large white "stripe" which runs down the back of his head but disappears behind a mass of spiky, light-brown hair- which is his second-most notable feature. He has separated eyes with green irises, and a white muzzle with a small, triangular nose,

There isn't much to say body-wise, other than light-brown fur, a short deer-like tail, and white hands, feet, and belly.

Arturo is typically seen wearing a black t-shirt beneath a white longsleeve jacket, light-gray pants with a dark-brown belt, and white shoes with black soles. On his belt is a sheath for his dagger, the Chronoblade, and around his neck is a necklace with a silver hourglass pendant at it's bottom.

The Chronoblade itself has a dark-oak handle with a leather grip, it's blade being slightly curved with a hole near the base, and inside the hole is a small, metal hourglass just like the one on Arturo's necklace.

Arturo is very calm and very patient- fitting for someone in his line of work. He rarely looses his temper and manages to stay cool-headed in almost any situation. The only times he truly gets angered are when someone he cares about is threatened- or worse; but there are few that he has attached himself to, making this an unlikely occurrence. As implied, he prefers to distance himself from others, staying away from friendships and almost always wanting to work alone.

However, he's a good person at heart- even if morally neutral. He does his work as a mercenary and bounty hunter to help support his family and home, something he has sworn he would do since the day he left.

Relationships Arturo has with other characters.

Arturo has the power of Chronokinesis, or the power to manipulate time. This power is granted to him by the hourglass necklace he wears- and if it were to be removed, he would loose his powers until he wore it again. The effects of his dagger are also connected to the necklace, and would be lost as well without it.

The Chronokinesis granted by the necklace is quite limited, however, only being able to alter the perception of a single person at a single time- including the wearer. The necklace also has a limited amount of power, so the more drastic the alteration, the more power it consumes, and the less time the effect lasts (see chart). It can recharge though, but the time it takes to recharge is relative to the amount of power used.

As stated, this power is also connected to the Chronoblade, which is generally used to more accurately and more consistently slow down an enemy that is hit with it.

Arturo can also use this power in small, concentrated areas, and generally does so to heal himself or others by increasing the timeflow around the wound, thus increasing cell regeneration and repair.

Other than his Chronokinesis, Arturo doesn't have many abilities. He has a good sense of smell, somewhat heightened hearing, and can see well enough in the dark, but that's about it.

Retrieved from "https://sonicfanon.fandom.com/wiki/Arturo_the_Impala?oldid=1838561"
Community content is available under CC-BY-SA unless otherwise noted.