Pianoteen, the author of Arthur the Unicorn, considers this page to be unfinished. As such, some sections may change. 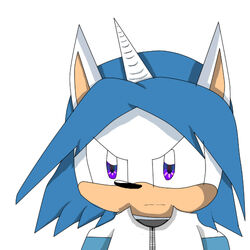 Arthur the Unicorn is a character created by Darkest Shadow. He is a high level magic user, the only one in Tamaruin City, as well as the younger half-brother of Krys.

Somewhere in the hospital of Freshsnow Town, on the 24th of January, a baby white unicorn was born. The parents were fascinated on how he looked and decided to name him Arthur, as they could see that there was a past legend named King Arthur, and that their baby will be a legend when he grows up. His parents loved him deeply.

When he was about 2, Arthur learned how to use his magic ability. It was for the little things, like all unicorns/magic users learn, such as his telekinetic magic on very light objects, and turning pages of books. When his parents saw this, they were in awe;their baby, unlike them, could learn magic!

Having this knowledge, they didn't know what to do with them, so with sorrow and shame, his parents sent Arthur away to a different town. Arthur was taken by a stork to two different parents, that he has never meet before. He had no problem being thousands of feet in the air.

When he landed safely on the ground for his new mother and father, the air smelt different, everything was warmer, the air was dustier, which could only mean one thing;Arthur landed in Tamaruin City! The mother opened up the door and was a little frightened at first. She then picked him up and took him inside.

Arthur was introduced to his parents;Leona and Franklin the Wolves. The only thing making them more frightened about his species as a unicorn, was what he could do with it. Using his horn, he learned to lift himself in the air to give a hug to his mother. As amazing as it was, she was going to love her new child for many many years.

During his pre school years, he learned to talk. Lots of his classmates were surprised by what he could do, being only 4 years old. He learned many new spells, such as shielding himself, shooting light magic beams, and making other heavy objects levitate.

Arthur is somewhat serious. He isn't the kind of guy tat you could just joke around with. He knows how to take a joke, and crack a laugh. However, if the joke's on him, then he wouldn't even laugh if someone paid him.

Arthur is very kind to the ones he trusts. He could be a real nice guy if you know him that way. He would usually worry about Krys sometimes though.

Being a unicorn, Arthur knows experienced magic. His magic skills are very good and everyone thinks that he's amazing. When he performs magic, his aura is a deep blue. While performing his spells, some can really impress people.

Retrieved from "https://sonicfanon.fandom.com/wiki/Arthur_the_Unicorn?oldid=1800450"
Community content is available under CC-BY-SA unless otherwise noted.