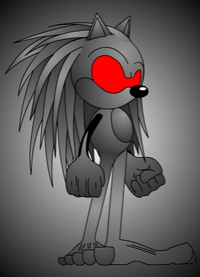 While his appearance does vary depending on what life form he absorbe's.Artemis's current appearance is a is a echidna like creature with gray skin, And sloppy hair running down his head, He wears no gloves or shoes, And has some sort of mysterious black substance running down his arm. He also has completely red eyes.

Most of his basic personality is unknown since he barely knows how to talk and mostly speaks broken english,He does often show he need to survive, Haunting on smaller prey and absorbing there DNA. While does of his evil acts aren't out of any true malice, He does often enjoy causing pain to some of his victims.

Artemis was once a small colony of space rocks that where exposed to high chemical reactions and later evolved into Artemis, Soon after this Artemis landed on moebius via a comment. Once he got there he was just a big glob was ugly flesh but he later absorbed the DNA of a male edcina, Do this day he is still on the planet looking for other host to feed on.

Relationships with other Characters

Retrieved from "https://sonicfanon.fandom.com/wiki/Artemis_The_Space_Monster?oldid=1851666"
Community content is available under CC-BY-SA unless otherwise noted.