You don't know what it's like! Fighting while blind. You can't see where your opponent's coming from, and they have every opportunity to get out of the way when I try to attack!"

Arrow the Wolf is a character who appears in The Legend of Fox the Brave. He is a Mobian wolf who was born blind, in Windy Moor Village. Despite being born in a village, Arrow currently lives as a Wandering Wolf, apart of Ash's Pack, while his brother Noah resides at the Storming Base. 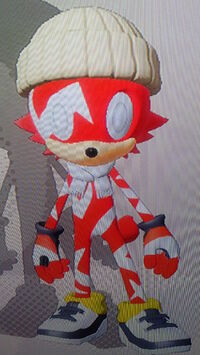 Arrow is a wolf with red fur marked with angled white stripes, and wide, sightless eyes(when he has sight, he is shown to have amber eyes). He wears fingerless white gloves with an orange streak on them, a simple beige beanie, white scarf, and black and white sneakers. As of Wandering Trouble, Arrow now has a long scar on his right side, a reminder of his run-in with Mimic

Arrow is prickly, defensive, and snappish. He can get very sarcastic at times, and hates it whenever someone points out his blindness. Despite this, he is a loyal friend, if rather blunt at times when explaining things

Before the Series: Noah and Arrow grew up in a small town called Windy Moor Village, which was a frequent and favorite target for the rogues known as the Jackal Squad. Their leader's favorite target for bullying was young Arrow, because of his blindness, and the leader's belief that only the strong should survive. Arrow refused to be cowed by his bullies, and Noah often flared up in defense of his younger brother. After the Jackal Squad left the Village alone, they lived in peace until Infinite made a return with Eggman, destroying the village to instill terror in the residents, and capturing those who didn't die in the attack, Noah and Arrow among them. The two brothers managed to escape and stay in hiding, but lived in fear of Infinite finding them and "finishing the job"(like with the residents of Ocean Point Village). They eventually managed to make it to the Storming Base after the warriors' mission to rescue the Wandering Wolf Pack, but were eventually taken to the Pack because of Arrow's strong belief that they belonged with the Wandering Wolves.

Because he was born completely blind, Arrow cannot see anything, and is easily overwhelmed when an enemy is all around him, and constantly moving, which scares him very easily.

Noah is very protective of Arrow, and he doesn't mind, since while he can do things mostly by himself, he cannot see, and is often bullied

Arrow is good friends with Ash, sometimes providing explanations to his odd dreams, though his sixth sense confounds Ash sometimes. It was confirmed by series creator Burpy's Dream that Arrow and Vernon were both adopted as foster sons by Samson and Anna

Retrieved from "https://sonicfanon.fandom.com/wiki/Arrow_the_Wolf?oldid=1866109"
Community content is available under CC-BY-SA unless otherwise noted.