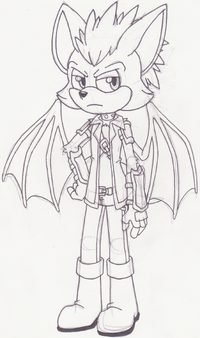 Ardashir the Bat is one of the footsoliders of The Thundering Armada, and one of the few members that is a regular Mobian animal, as opposed to being a Mobianoid yōkai or any other mythical creature of Asian origin.

A lean bat who stands a little over three feet tall, Ardashir has a short, somewhat rounded muzzle, large, pointed ears, and a fairly small, pointed tail, as well as a pair of medium-sized bat wings on his back.

His fur is primarily desaturated cyan in color, with a deep peach muzzle, chest, stomach and inner ears. His hair, which is styled into a sort of mohawk, is deep space sparkle in color, and his eyes are dingy dungeon in color.

His outfit consists of a sleeveless jacket with trim, pauldrons, gauntlets over top of elbow-length, fingerless gloves, a belt across his chest, jeans, boots, and a studded choker collar.

A well-trained combatant in his own right, Ardashir has quite a few years of experience under his belt, and it shows. He wields a pair of kris daggers as his weapon of choice, and has a fairly fluid and swift fighting style, making him deadly in close-quarters combat. When deprived of his weapons, he has no problems fighting with his fists and feet, and can hit surprisingly hard. Being a bat, he has razor-sharp teeth, and can deliver a nasty bite; he is also capable of flight, and is faster in the air than he is on land.

He is capable of moderate Aerokinesis, and can use low to mid-tier techniques of the Wind Element, such as Wind Needle and Air Slash.

Ardashir has no specific resistances to any Elements or energy-types. He is quite fast, and can easily outpace slower foes and evade their attacks; he can also nullify weak Poison-aligned techniques with his Aerokinesis.

Ardashir is weak to the Elements of Earth and Ice. His defenses aren't anything special, therefore he mostly relies on his agility to try and evade potentially devastating attacks. Being physically restrained completely nullifies his Aerokinesis.

A somewhat cold-natured person, Ardashir tends to maintain a serious demeanor, and is a bat of few words. He is quite ruthless in combat, and does not believe in going easy on anyone, even if they may be less experienced in a fight than he is; to him, fighting is about taking any advantage one can get, and the concept of "honor" is one of weakness.

Retrieved from "https://sonicfanon.fandom.com/wiki/Ardashir_the_Bat?oldid=1798845"
Community content is available under CC-BY-SA unless otherwise noted.