The author of Arcadia Angels considers this page to be unfinished. As such, some sections may change. 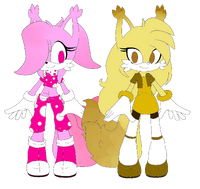 The Arcadia Angels are an idol group that appear in Nikki the Hedgehog: Adventures on Arcadia Island consisting of two female foxes Cherri and Pocky. They are a very popular idol group on Arcadia Island, and occasionally perform there. They are also Princess Naomi's cousins, though they don't really interact with each other much. Almost no one even knows that they are related, except for them.

Voice Actor: JubyPhonic
Cherri is a 15 year old pink, female fox and is the younger member of The Arcadia Angels. She is hyper, peppy, and loves performing alongside her sister, Pocky. Cherri wrote the girl's first song, Fantasy Fox, and still writes most of their songs. She absolutely loves soda, and her favorite flavor is Cherry Pepsi.

Voice Actor: Rachie
Pocky is a 16 year old female, light brown fox and is the older member of The Arcadia Angels. She's the more quiet, calm sister, and enjoys performing just as much as her sister, Cherri. However, Pocky enjoys lots of other things too, like reading, drawing, and taking photos. One of her secret hobbies is taking selfies.

Retrieved from "https://sonicfanon.fandom.com/wiki/Arcadia_Angels?oldid=1627739"
Community content is available under CC-BY-SA unless otherwise noted.