Voted Best Fursona for Winter 2015!
This is an article about Arashi The Husky-Dragon Hybrid, the fursona of Metty.

"Hero? I'm pretty sure I'm a hero in some way, just not to you. Heh, if you really think I'm a hero, then why aren't I stopping the villains of this world?"
—Arashi, explaining about her alignment. 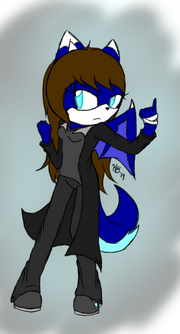 Arashi, full name Metal Arashi, is a 17 year old Husky-Dragon hybrid, who has the ability to manipulate electricity. Due to her past, Arashi is somewhat power crazed, and when angered she goes into an unstoppable violent outburst. On the inside, Arashi is a nice enough person, and is known to be super shy around people she doesn't know. She is also a huge video game fan, and a student writer as well as wannabe artist. Arashi is known to be the one of the members of Raiders, a rebel group that goes against G.U.N.

Arashi is a relativity thin and lean Siberian Husky of over average height (4"5) for being her age, seventeen years old. She has dark blue fur covering most of her body, the tips of her ears, muzzle and inner ears are a white colour and her fur is rather plush and short. Arashi has long brown hair with four tufts of hair slightly above her eyes and a small tuft of hair on top of her head and hair is styled to look slightly messy. Her eyes are an electric blue colour, and glow from time to time and her chest fur and underside of her tail are an electric blue colour. She has a pair of rather small wings on his back, with one spike on-top of them each and membrane of his wings are a dark blue colour like her fur, while the insides of the wings are a lighter blue. She is known to have a scar on her left hand, but it's covered over with a bandage due to a previous wound that was inflicted by a Berserker.

Arashi was born out in a forest beside Central City, born to a a Exalted Blaster named Daisuke, and her mother Naomi. The forest was known for it's different type of trees, that were unable to be set on fire so easily by normal fire. Arashi was the second oldest in the family, her siblings being her older brother Ren and her younger sister Yuki. Arashi was born with the unique ability to run faster and have unnatural reflexes.

On the outside, Arashi hates being social, and prefers to be left alone regardless. She doesn't really like being with others, and would prefer to work alone to get jobs done. It is noted, she has somewhat of a superiority complex to others, most of the time thinking she's more superior than others, that being humans.

Other that this, Arashi hates people that break the rules and that mess around, most notably because of her serious attitude and her ability to not take jokes. Arashi hates authority, as she is noted to be a rebel, and she would go against anyone that is in power, mostly online on the forum she goes on to talk to other Mobians. She will stand up for what she thinks that's right, often getting into a argument about what she stands up for.

Arashi is known to be very angered easily, as she is apparently angry all the time. Angering Arashi will set her off, and make her go into a violent outrage. Arashi also relies on her instincts from time to time and they occasionally make her go crazy.

Arashi does hold grudges against anybody who says something about her or angers her. She is known to be quite aggressive, if even poked, meaning she doesn't like social interaction. Being slightly power crazed from her past, she is obsessed with power and is known to hate cowards.

While in a calm state, Arashi is known to be extremely shy, and untalkative to people she doesn't know. This can cause her, to go walk away from the person that greets her, or she would ignore them. She seems like a talkative person, when you make friends with her, and she is friendly and nice enough. She is known to complain an awful alot about the smallest things, and go on and on about things. She is known to like reading books, writing, drawing and playing video games as well as cats. She is known to love cats and would love to keep one.

Arashi possesses enhanced speed, her being able to run at about 80mph at the most. This can be a great advantage against foes that are slower, like Gunthar and Metal for example. This also allows her to dodge attacks easier, as her speed is Enhanced.

Arashi is a somewhat slightly skilled artist, being able to draw things such as plants and Mobians like herself. Though she isn't very advanced in this, she continues to try and learn how to draw better. She is known to draw trees very well.

Arashi is a pro gamer, being able to play games extremely well. Being a pro gamer, Arashi is known to be one of the best gamers. Her favorite game is known to be an RPG named Axe Sword Online, which she plays as warrior character trying to defeat all one hundred levels of the tower that floats in the sky.

Arashi is also an somewhat skilled writer. She occasionally writes various things, based on what she sees or does. She is known to have created a character based after her character in the game she plays called Pyro. She plans to write a book when she gets skilled enough, based on her main character's adventures.

Arashi is somewhat skilled in her ability to use a handgun. While she only used it in secret, she isn't as skilled as a advanced marksman. She currently only uses it as defense, as she prefers to use her electrokinesis instead.

Arashi doesn't know how to use her katana in battle despite owning one. She would generally take it out to intimidate her foe, or have it ready for defense. She hopes to became better at using the katana.

Being an electricity wielder, Arashi is weak to Earth naturally. As Earth nullifies her ability to control electricity, and destroys it. Arashi has no ability to fight despite her owning a handgun or katana. Being the hybrid she is, Arashi cannot fly regardless.

Will make some in the near future.

Will make some in the near future.

Retrieved from "https://sonicfanon.fandom.com/wiki/Arashi_The_Husky-Dragon_Hybrid?oldid=1867766"
Community content is available under CC-BY-SA unless otherwise noted.