"Look, don't let Uncle Mony scare you like that. He just says that because he really cares about our people and wants us to keep our strength and independence. But don't worry too much about it. We talk to "other peoples" all the time. We eagles are craftsmen, remember? We make things for others. Trust me, Manic is a great friend. Besides, he doesn't even have his own "people." He's not from around here..."
—Aquila the Eagle (talking to her little sister Maria in "If You Want to Soar..." 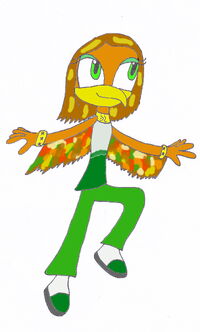 Image Caption Here
Basic Info
Name
Aquila the Eagle
Age
17
Gender
female
Species
Eagle
Alignment
Hero
Relationship Status
that sort of romance that is obvious to everybody but the ones who are actually in the relationship
Biographical Info
Birthplace
The Congo, Earth
Current Residence
Planet Shinia
Relatives
Her mom Lucia

Her sister Maria Her Dad

Aquila is 17-year old eagle and member of the Anillo tribe of eagles on the Planet Shinea, her home planet. She has the ability to fire energy bursts of light from her hands, and she is the owner of the Ring of Light, from which she gets her powers. She wears a copy of the ring on her other arm, her own creation, as she is also a jeweler like her mom.

Aquila has no real memories of her early life. She was born on a Shinean colony located in a hidden area of the Congo jungle on Earth. The colony was for mostly scientific purposes, but there were some hidden motives in place of trying to find material for a weapon...

Before the colony could really accomplish its goals, it was attacked by a mysterious villain, later found out to be The Controller, and the colony was evacuated. Many of the "lower" members had their memories of the colony erased in the process, including the young Aquila and her family, to avoid questions about the attacker. The Controller was a king from another world, intent on ruling the universe. The Shinean Council, sensing hostilities, tried to ensure peace with The Controller through diplomacy. However, negotiations went south and The Controller now wants to conquer the Shineans first. The Council, fearing that the Shinean people might lose confidence in them, hid any news of the threat and are now trying to get whatever they might need to defeat the Controller before he attacks Shinea. The Council are the acting rulers of Shinea, consisting of a representative from each tribe on Shinea.

Aquila was born in the colony and lived there until she was eight. During this time, she found the Ring of Light locked away in a cavern while exploring. She put it on and has kept it ever since. The Ring was centuries ago the possession of the royal family of Shinea, but after an attack from space pirates wanting the Ring it was hidden away and the queen, Queen Falina the Eagle, stepped down from the throne. The Council was put in power afterwards. The Ring was forged from the cosmic energy of the planets aligning, and it was made to only accept those of royal blood. Therefore, Aquila is actually a descendent of Queen Falina.

Since then, Aquila lived in the village of her people, the eagles. Her father was the chief of the village, and her Uncle Mony was the eagle representative in the Shinean Council. Her mom Lucia was a jeweler, and she taught Aquila how to do the trade. Her mom knew the true history and significance of the Ring of Light, but she was pressured by her brother-in-law Mony not to say anything about it to Aquila.

Aquila's life was relatively normal until the day she met Manic. She was just flying over the mountains when she was knocked to the ground by some blast from the ground. She looked around to try to find the source of the explosion, but instead she found Manic the Hedgehog. Unknown to either of them, the blast was a try by some Shinean scientists inside the mountain to test a new weapon that could use cosmic energy. The weapon was too much for them to handle, though, and it created a rift in the space-time continuum that accidently connected to Manic, currently on Mobius with his family as the "Council of Four", and he ended up on Shinea.

The Attack on Home

Two years later, the planet of Shinea was unexpectedly attacked by the Controller. His only purpose was to "warn" the Shineans and pressure them to surrender, so he left soon after he started. This left most of the Shineans confused about what happened, and the Council was forced to make a move. Referring to the Controller as their "mysterious attacker", they proceeded to build a giant starship with the purpose of finding him, asking for volunteers to join the mission. Aquila and Manic both volunteered to become crew members. Manic was still on Shinea all this time because he had no way of getting back to Mobius. He ended up as an apprentice to a porcupine cook at a trail-stop diner. Anyhow, the Shinean Council appointed people to oversee the starship. Although they were going on the precept of stopping the attacker, their secret mission was to gather as many weapons as they could to fight back at another time. Much of the crew was unaware of this, though.

After weeks out at space, a top-level team of the starship, Sector A went off course to Mobius to invade Angel Island and steal the Master Emerald. Knuckles, Sonic, Tails, and Amy went after them and attacked back. Aquila, thinking that they were intruders, in turn attacked them. During the battle, Knuckles accidentally knocked off Aquila's ring, causing her to release light energy like crazy. She did not know that this could happen, so she of course couldn't control herself. She finally got the ring back on, but was still baffled by what just happened. She slowed down long enough to hear Knuckles' side of the story, and she was certainly confused by that. She went to talk to one of the starship leaders herself, but he gave allusive answers, and, afraid of her new-found knowledge, promptly fired her from the mission. With nowhere to go, the Sonic guys ended up letting her come to Mobius with them.

Manic left the starship to go with Aquila and was excited to finally find his brother Sonic. However, Sonic didn't have any memory whatsoever of that time. His memory had been erased by time-traveling Shadow and Rouge from an alternate reality, but that is another story. Meanwhile, Aquila stays on Mobius until she can figure out just what it is that the Shinean council is hiding...

Aquila is dedicated yet fun-loving at heart. She always loves to explore new places and meet new people. She can be very by-the-book, sticking to the rules and trusting the ones that seem to be trusted. She is also concerned about keeping her family's honor. However, she learns along the way that you can't always take something or someone for face value. Now, she just wants to do want is right for Shinea and the rest of the universe.

As an eagle, Aquila has the ability to fly. She is also connected with the Ring of Light, being, in fact, of royal blood, and only she can use it. With it, she can blast bursts of light energy. If it were taken off, all of the energy in her would go out at once, like an inhibitor ring, but as the energy is not in her genetics, she would lose her powers if she lost the ring for more than half an hour.

This is my original version of Aquila's beginning story. In this version, I had the Metarex from the Sonic X series involved; they were the ones who attacked the planet instead of the Controller, who did not yet exist. The Master Emerald was never stolen, only Aquila and Manic by chance ended up on the planet.