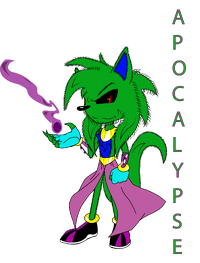 "...you'll need more than several magic rocks to get the better of me!"
—Apocalypse to Super Cabara, Old Sonic Comic

As amorphous energy given sentience, Apocalypse's appearance can differ at any given time. Therefor, describing it is like describing the shape of water. IT'S NO USE!

He's usually cocky, playful, and a bit stubborn, throwing his power around at random either to show off or out of boredom. However, that can change without warning, as he can be reserved with a bit of a sizzling temper as well; this infamous fury often manifests as a quiet explosion and is known to go from 0 to 100 real quick in a fit of rage. No telling how he'll react to news good or bad.

Apocalypse, with the help of his slave Durak, has conquered Mobius and enjoys a long, successful rule over his Demobians. However, a few million inhabitants of Old Mobius have formed a special military force to fight against his legion. With his foes' whereabouts cloaked in a fog of mystery his legion is fumbling around playing hide-and-seek with them. However, this is no big deal to him as he feels his legion is more than powerful enough to wipe them from the planet forever. Apocalypse still controls the planet, as far as he's concerned, he is on the winning side and anyone who feels opposed to this is a dead man walking. Despite the advantages he has over them, his foes still seem to have little glimmers of hope in their hearts. One of these glimmers have been mentioned time and time again by his prisoners, the Hero of the Wind, a young alien-hedgehog hybrid by the name of Cabara.

Apocalypse's manifested forms generally have demonic features such as fangs, claws, and horns; he also possesses supernatural levels of strength, speed, durability, stamina, . His senses are so keen, he can see and hear just about everything that goes on in the universe; these stats are virtually limitless thanks to his connection to the Chaos Force. He is capable of mimicking many of our heroes' signature technique like Sonic's Homing Attack, Shadow's Chaos Spear, Knuckles' Volcanic Dunk, and more.

As a being composed of chaos energy, he has a powerful link to the Chaos Force. This link grants an unlimited supply of energy and enables flight, superhuman physicality, molecular/spacetime manipulation, and psychic powers; with these abilities, he can essentially do anything.

Being made of chaos energy, Apocalypse is basically immortal; he can use it to regenerate and whenever he "dies", the energy used to form his body disperses only to reform him later.

Apocalypse can do virtually anything with his mastery of chaos energy. His control over the molecular bonds of substances gives him the ability to make clones of himself, transform into anything or anyone, bestow and take powers, and manipulate the elements and weather. He also has the ability to create, absorb, manipulate, and destroy matter and energy; this allows him to launch as well as nullify energy attacks, produce barriers, and augment his capabilities. With the ability to manipulate time and space, he can do a plethora of things; including controlling the flow of time, teleportation, and time travel.

Over the centuries, Apocalypse has become a very experienced and versatile combatant. Though he is primarily brutish and straight forward in combat, he can be very clever and deceiving. Having led an army for millennia, he has quite the talent for combat and war. Apocalypse is proficient in various forms of armed and unarmed combat.

Apocalypse is powerful, but not unbeatable. He is vulnerable to sunlight and solar energy; with enough exposure, it can even "kill" him. Chaos energy is the most powerful form of energy in existence, therefore it would take more chaos energy to beat him; especially positive chaos energy, since he is a being of negative energy. As a demon, Apocalypse would also be vulnerable to sacred weapons/energies, meaning opponents of divine lineage can damage and even kill him. Opponents of relative strength, speed and abilities can beat him, even if they can't necessarily kill him. Cockiness will cause him to make stupid mistakes. Any abilities with immortality removal/negation or severing the connection to the source of it can render his immortality ineffective; and with one fatal blow, he'll be down for good. Siphoning his energy will weaken him to the point where he can be killed.