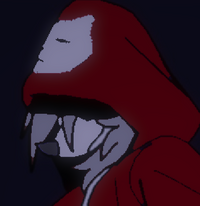 Anzyl, before acquiring the Godhand, was a rather averagely-built teenaged lizard. He stands at the very precipice of being right under 6 feet tall, a fact that causes him great amounts of chagrin, and has an athletic frame. When he actually had both of his own arms he carried a completely normal appearance, his silvery scales contrasted lightly by dark brownish hair and green eyes. However, after being experimented on and eventually forced into using the Godhand, he underwent a transformation. His hair shifted into a platinum-greyish tone; scales turning paper-white as his eyes became almost fully black, indistinguishable from the shadows cast by his ever-present hood save for the occasional glimpse of a glowing red iris. His athletic frame became slightly bulkier as a consequence; his body now covered in scratches and scars. The Godhand is mounted where his right arm was violently torn from his body; the tattoos on it extending over his back to show that it has accepted him as its host with complete ease.

Pre-Godhand Anzyl was a rather ordinary lad; spending a good portion of his time trying to become better at cross country and failing at romance with the various girls he was interested in. Post-Godhand, however, Anzyl has become a somewhat cold and disconnected individual with an intense, burning desire to prevent the sort of heinous acts that granted him his power in the first place. He realizes that it's a bit of a cliche, but he also doesn't care.

The only individuals who have drawn more emotion out of him than simple annoyance or vague acceptance have been Riuvec, who provoked complete and utter rage, Emperor Crab, who provoked a profound and intense disgust, and Zelica; the one person to have given him a place to stay when no others would. He originally only found himself physically attracted to her, but after time spent getting to know her has realized he has more than just lust for this girl... He loves her. She feels the same.

After entering a relationship with Zelica, he's found himself a bit more outgoing and cheerful; no longer simply hiding his emotions from others. He's still prone to acting a bit brooding and bitter, but he's much more in-control of his negativity now.

Anzyl was born to a draconic father, Randy, and a chameleon mother, Clair. This relationship, and the resulting birth of Anzyl, was considered to be an unforgivable crime by the speciesist regime currently in control of his homeworld; and thusly his father and mother were exiled to their presumable deaths, leaving Anzyl without a family and without a home. He was simply taken in by the state afterwards and was allowed to live a fairly ordinary life until he hit the age of 15. The next few years shaped him into the individual he is currently; the wielder of the Right Godhand and the protagonist of our story. During the period he spent wandering and occasionally dispensing justice wherever he really could, he came across a small town. None of the residents would allow him to stay in their homes for the night; though as he left town he was stopped by a female fox who offered to give him shelter for as long as he needed. She too was an outsider and was thusly rejected by most of the townspeople; so she simply lived in one of the older buildings that was no longer used. The pair grew closer over a good period of time; and eventually entered a relationship. This relationship, however, inspired a negative reaction from someone Anzyl had never even met before; a wolfman named Riuvec who spent about ten minutes trying and failing to beat him up before accidentally dazing himself on a pillar and being promptly given a good trouncing. Riuvec and Anzyl continued to have occasional fights, with Riuvec determined to show the fox (whose name happened to be Zelica) that he was the better option, and Anzyl just taking the little duels as practice and training.

After a certain period of time, Anzyl came into contact with Emperor Crab, who attempted to force Anzyl into his employ. This failed, though Anzyl's now-advanced capabilities with his still-not-completely-mastered Godhand were incapable of harming Emperor Crab to a significant enough degree. Even with the assistance of a powered-up and incredibly angry Ultimate Instinct Riuvec, Emperor Crab was almost completely unharmed and proceeded to trounce them with incredible ease, throwing them from his kingdom with a single swing of the claw. Thus, another rivalry was born.

At this exact moment in time, Anzyl may or may not be trying to figure out a way to defeat Emperor Crab.

The fact that Anzyl has The Right Godhand lends some perspective on why he's capable of trouncing just about every single individual he comes across. Thanks to the flat increase to strength, speed, stamina and durability, Anzyl is capable of taking multiple hits and dishing them back out with incredible force. His natural speed and strength as a semi-dragon are only multiplied indefinitely by the Godhand, which makes him significantly more powerful than most other wielders of the RGH. His physical statistics include:

Superhuman Strength: The most recent upper limit of his strength is best demonstrated by the fight with Armored Emperor Crab. With the Godhand unleashed, his power at its highest peak, and using a unique transformation unlike any other seen up until that point, his strike against Emperor Crab was capable of shaking the entire globe; as well as shredding the walls and floor of the room they battled in.

Superhuman Speed: Has been observed casually moving from one side of a town to another nigh-instantaneously. At his highest peak (demonstrated in the AEC fight) he was able to bounce from wall to ceiling to wall in rapid succession around Emperor Crab, doing heavy damage to his armor simply by moving at such an advanced speed that he appeared to be constantly breaking the sound barrier. Could potentially reach FTL if pushed sufficiently.

Superhuman Stamina: Was able to fight against Emperor Crab for well over three hours straight; only tired out when a heavy strike from Emperor Crab nearly knocked him out. Has been known to go days without rest.

Superhuman Durability: Has taken countless strikes from Riuvec without ever really being significantly damaged; held his own in combat with Emperor Crab without being severely wounded for hours in end.

His techniques, transformations and attacks include:

Shockwave: Anzyl can project cutting waves of energy from his hands; have been known to cleave mountains with ease and can clash evenly with Riuvec's shockwaves.

Ray of Divinity: Anzyl can fire a thin, sharp piercing beam of energy from his fingertips. In his basic form these have been known to tunnel through armored opponents with ease; though in his strongest form seen so far these were incapable of piercing Emperor Crab's shell.

Godly Blow: Anzyl rears back his fist and throws a casual haymaker; the force of which is enough to send a larger opponent (such as Riuvec) flying through entire mountain ranges. Was able to crack Armored Emperor Crab's shoulderplate with relative ease.

Godly Wrath: Anzyl rubs both hands together vigorously before dragging them away from each other; each hand now being cloaked in a radiant glow. This enhances his strikes to the point that Emperor Crab felt the need to consciously block them; knowing that they could damage him if he wasn't careful.

Godhand Unleashed: Anzyl unleashes his Godhand, which allows him to access even greater levels of strength than his casual form can allow. While the time he can spend in this form is limited, he has trained it to the point that he can remain continuously unleashed for almost a full day straight. Pushing this, however, can cause intense strain and even force him into a comatose state for roughly half the time he used the power.

Draconic Frenzy: An ability passed down to him due to his father's dragon genes; this state allows him to access the magic that dragons are known and feared for, giving him abilities such as flight, elemental control, and access to the knowledge of their ancestors.

Surpass them All!: Anzyl unleashes his Godhand while simultaneously entering a state of Draconic Frenzy; which drastically increases his levels of strength and speed. The downside is that this form seems to cause him to totally lose control on extreme occasions; though his instincts are honed enough that he can continue to fight effectively during these periods.

Unknown Zenith Form: Achieved only during the final minutes of his fight against Emperor Crab, this form vastly surpasses just about all previous incarnations of Anzyl. His scales slowly shift from white to pitch black; his Godhand tattoos glowing an intense white on his arm as his eyes begin to give off a strange white light. His body gives off steam and begins to glow with a radiant white aura that seems to flicker a multitude of colors, and his next strike against Emperor Crab seemed to come from nowhere; instantaneously shifting from a defensive standing pose to a striking position. The force of the blow blew Emperor Crab's armor to pieces, though Emperor Crab quickly retaliated by unleashing a flurry of blows. While Anzyl's unusual form seemed to render him either intangible or so fast that he was instantly dodging every attack; he seemed to lose his form and fell to his knees; giving Emperor Crab the opportunity to strike him from the tower with a half-force swing of the claw. This form has not been seen again, but could very well come up in another fight.

Anzyl doesn't have any specific weaknesses physically speaking; though he's quick to anger if he, Zelica, or innocent lives are at any time threatened.

Retrieved from "https://sonicfanon.fandom.com/wiki/Anzyl?oldid=1867791"
Community content is available under CC-BY-SA unless otherwise noted.