Anya is the only survivor of a now non-existent village from another world named Kanerian she was driven crazy with power and left her village destroyed with only one memory of what happened that day. 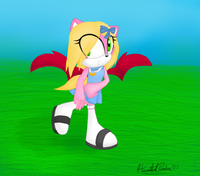 Anya is often quite shy when meeting someone new. She is quiet and doesn't really wanna talk to that person. Once getting a close bond with her though, Anya is a loveable, joyful person who can help brighten up any situation.

Anya was born a happy child. She had everything she wanted, but not in the way most assume. As a child she actually had very little to call her own, she had one sister named Ann who actually got everything she wanted. Anya was taught at a very young age to cherish what she had. All she wanted was her family, a home, and survival. She had all three. She was shy and very quiet, with no friends (which didn't matter, she was not one to leave her house often.) She started to become bolder as she got older. She was one day sneaking off to a party when a milky white ball fell down from the sky and hit her surrounding her with energy.

The darkest of feelings surrounded Anya in a whisp. She fell to the ground and instantly became crazy. Destroying her small village until nothing was left. She finally managed to control herself and saw what had happened. She suddendly wept and slowly disappeared until only a flower remained in her place.

She had formed from air at least 5 years later on Mobius, and given fake memories by an unknown force.She was different, she was not even the same person,She trudged many days and nights, sleeping anywhere she could until she found herself helping people. She finally found herself having a home in Central City, and although she didn't find herself having the chance to be a big hero, she stilled applied herself and started trying.

All Of Anyas Powers are developed, but most are Unknown

Relic of Holy Armour- a small white tablet attached to a thin chain of which gives power to the heart.

Defense: Power of the heart sounds of no big deal but protects from all but a blade of pure gold.

Upsides: *Check defense and Offense sections* Can only be used by the pure heart it has connected with.

Downsides: Blinding Light affects Anya and can be used against in some-most cases.

Other: When touched by darkness the Relic of Holy Light blows into dust and reappears in owner's hand (or in the case Anya's hand).

Found: laying on a broken tree branch near of which she lives.

Helmet of Holy Armour- part of the Relic of Holy Armour's Armour. It is white with gold streaks and looks just like a mask over someone's face.

Upsides: Is Deceptive looking and can only be broken of a blade from pure gold

Downsides: The helmet allows no sight and instead the heart guides the way. but sometimes the heart can be descieving.

Other: it attached with the Chestplate, leggings, and boots of Holy Armour.

Chestplate of Holy Armour- part of the Relic of Holy Armour's Armour. It is white with gold streaks and looks like a very big jacket with a dagger sticking out of the chest

Upsides: protects the most vitle areas. Can only be destroyed by a golden blade.

Other: is attached with the Leggings, boots, and Helmet of Holy Armour.

Leggings of Holy Armour- part of the Relic of Holy Armour's Armour. It is white with gold streaks and look like the average pants.

Upsides: protects legs and can only be destroyed by a golden blade

Other: is attached with the Helmet, Chestplate, and Boots of Holy Armour

Boots of Holy Armour- part of the Relic of Holy Armour's Armour. It is white with gold streaks and looks like the average pants Attack: has dagger in bottom of the shoe

Upsides: protects feet and can only be destroyed by a golden blade

Other: is attached with the Helmet, Chestplate, and Leggings of holy Armour.

Cheeri- is Anyas best friend, the two are like sisters though they have only known each other for a year. Both Care for each other very much.

Chance- though the two do not have much of a friendship, Anya respects Chance very much and hopes he can help them along the way.

Sea- is Anya's romance interest. She keeps it a secret that she likes him but she also knows that he too has feelings for her.

Anya Has weaknesses, here they are listed:

Last Of Her Kind

Her world (Kanerian) entirely was destroyed by a group of overcomers from the closest plannet holding life. Anya had destroyed her village a week prior of the attack. Since then she has met up with Cheeri, another Kanerian, and Chance, Cheerians guardian. Then The Two Shared a vision of the nine clans of their plannet, and seven others. Each of them including Anya and Cheeri were standing on one stone piece and slowly all the pieces connected. Slowly Anya and Cheeri understood.

A few weeks forward a Red fox came from Central City and the three welcomed him. His name was Sea who he thought had a small case of amnesia. The two girls looked at each other and thought they had found another one of them. They welcomed him to stay with them and he did. About three days later they conirmed he was Kanerian and told him. After telling him, he seemd to understand it more. And so he decieded he would stay if what they said was true.

Anya When She Is Feeling Fancy 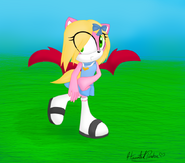 Anya, Drawn by Haunted Phantom
Add a photo to this gallery
Retrieved from "https://sonicfanon.fandom.com/wiki/Anya?oldid=1867793"
Community content is available under CC-BY-SA unless otherwise noted.