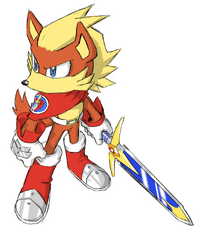 Antoine D'Coolette is a mobian coyote and long-time Freedom Fighter. He is a skilled swordsman and an expert airplane pilot. Originally sent to Mobotropolis as an apprentice, he was forced to flee to Knothole during Dr. Eggman's takeover. While he tried to be a brave soldier, he often came out as skittish and cowardly and it wasn't until he came close to Bunnie when he eased into his true self.

Antoine is a brown coyote with light yellow fur on his muzzle, on his stomach and inside his ears. He also has blue eyes and blond hair that is combed back.

For attire, Antoine wears a red scarf with a white and blue patch with a sword on it that covers his left shoulder, a white belt with a gold buckle, red boots with metal plates at the toes, and white gloves with metal plates in the shape of arrows and red cuffs. As a child, Antoine has neatly combed hair and wore red boots and arm cuffs, two sword straps that go around his body, forming an "x" shape, a red beret and white gloves.

Antoine was born into the noble D'Coolette family in Eurish. When he was a little boy, he was sent to Mobotropolis as an apprentice for the apprentice exchange program.

Like many children, Antoine was forced to flee to Knothole during Dr. Eggman's takeover, with him feeling personally guilty about being powerless to protect his kingdom. Antoine would soon develop a crush on Sally Acorn and would attempt to court her, only for his romantic intentions being rejected. He would eventually find comfort in Bunnie and would join the Freedom Fighters with her. They became really close until they eventually married.

Originally very skittish and cowardly, Antoine attempted to use bravado and confidence to hide his true nature, but ultimately failed. With help from Bunnie, however, he was able to ease into his true self.

Despite being still skittish at times, Antoine is a dutiable and loyal soldier and is brave when he has to. Aside from his love for helping others and his wife, Antoine's biggest passion is cooking.

Antoine first saw Bunnie while she was struggling to walk again with her new limbs, which inspired him to do more. They join the Freedom Fighters together where they would become close allies and friends and would eventually begin dating which resulted in getting married.

Retrieved from "https://sonicfanon.fandom.com/wiki/Antoine_D%27Coolette/Marshalia13%27s_Universe?oldid=1867797"
Community content is available under CC-BY-SA unless otherwise noted.