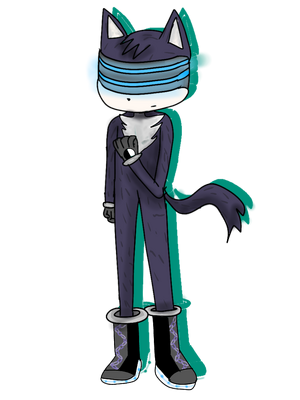 - When he can't use inverse

No time. Just kiss the ground and cry now.

Antis the Inverted - a character made by that person. He is a anthropomorphic cat from at least two hundred years into the future. He is a rival of Silver the Hedgehog, but they are very different. Antis sometimes was dragged into evil side due to the fact that he isn't the most good character.

Antis is an anthropomorphic purple cat. He has some gray fur on his chest. His skin is very light, nearly white. He has also a purple tail and a small piece of fur on the top of his head.

Additional, he wears gray gloves with a black-white circle on it. Antis also has black shoes with gray parts that has purple chains on it. These shoes also have silver rings on the top and white bottom with blue dots. Most important in his style is pair of futuristic googles. Because of them, his eyes are invisible. They look like a gray metal strip with blue lights in it.

Antis is very quiet. He says only one phrase, small sentences or just stays silent. He is also known for being sadistic and violent to others, like how he is taunting.

Antis is known for being somewhat of an evil person, but he also got a heart. Sometimes he stand against Team Sonic, but he never joins Dr. Eggman's forces. As stated by himself, he thinks that Dr. Eggman's plans are bad and have no chances to be true. Instead, Antis battles by itself. He doesn't like to battle as a team as he thinks that other's are slowing him down.

Antis's main power is Inverse, the ability to change something into its opposite. Before using it, he just says what he is inversing and its opposite (Example: Light - Dark.). He is a master in using it even if it has some barriers.

He is also known for possessing the Time Travel Ability. It's actually unknown, how he does it. Possible that he uses it like Mephiles did, or he uses his inverse ability (He could say ,,Future - Past" and then travel), but it's not known by anyone. Even Silver said one time that he don't know how Antis came to past. Physically, Antis is stronger than Silver that he can use many physical attacks. Like every character in series, he is very speedy.

You're blind or just weak. Eggman's plan is too easy to get rid of.

— Antis to Sonic
Retrieved from "https://sonicfanon.fandom.com/wiki/Antis_the_Inverted?oldid=1835893"
Community content is available under CC-BY-SA unless otherwise noted.