This is an article about Anti-Arnzarel: Arnzarel the Redeemable, a character created by Jaredthefox92 on 08/14/2015. 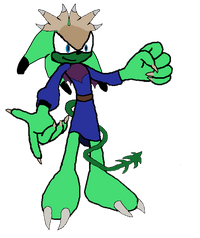 (Note: This article contains late night bored lols. If you can't take some self-depricating humor of my own character please refrain from reading it. -Jaredthefox92)

Arnzarel the Redeemable, (AKA: Anti-Arnzarel), is an anti doppelganger of Arnzarel the Revolting. Like his primal brother this Arnzarel asked too much from the gods and thus was turned into a hideous and gargantuan demon prince, unlike Arnzarel prime however this version of Arnzarel felt remorse for tempting the gods for power and thus decided to make it up to them by using his acquired powers for good. (Note: That he was blessed by completely different deities and not Grief, Cyrus, or Helussa)

Much like his primal brother Arnzarel the Redeemable takes the appearance of a towering demonic Moebian with six horns upon his head, a robe, talons and claws, a serpent like tongue, and a demonic tail. Unlike his primal version though his eyes are normal and blue color and his natural demon flesh is light green colored. One interesting aspect of this version is how humble he is and thus how he refrains himself from adorning his body with gold and thus wears metal tips at the end of his horns and a large and brown leather belt.

Arnzarel the Redeemable is in many ways opposite of his primal brother in his demeanor, while Arnzarel Prime tends to be boasting, arrogant, and greedy, Arnzarel the Redeemable tends to be shy, modest, and self-less. This version of Arnzarel is wary of his past wrongdoings and thus wants to help out anyone he can to make up for it. He is often known to be very hospitable to travelers and thus has allowed visitors to stay in his castle.

One intersting part of this Arnzarel's past is when he sheltered rebel Moebian fugitives from Scourge in his castle during the days before the Grand Revolution.

Almost the same as Arnzarel prime, however Arnzarel the Redeemable also knows very good healing and natural magic spells that can be used in various medical fields and to aid others in need making him an over sized de-facto white mage. So yes, he is a giant Dende now. XD

Many of these are the same as Arnzarel the Revolting's, but others are not.

Arnzarel is known to possess a supernatural strength granted to him by the Fighting God Grief, as such is is known to be capable of easily tearing a mortal into or even stopping a speeding car or truck that tries to ram him.

Arnzarel also possess supernatural daemonic endurance levels as well, he is quite capable of withstanding blasts that would easily incapacitate a lesser mortal being.

Arnzarel posses distinct supernatural senses that allows him not only to sense the mystical aura within another being, but also allows him to "smell" traces of magic and is even able to smell how pure or corrupt another mortals soul is.

Arnzarel is able to call upon his vast mystical knowledge to use a meager spell to teleport around, it is believed that this is his primary mode of transportation. However he is unable to teleport into distances that are not in range of his vision, and possesses a cool-down period before he can teleport again as well.

Arnzarel is able to unleash a loud and continuous unholy screech thus disorienting his opponents. He can often use this move to either suppress an opponent or distract them long enough to close in and engage in melee combat.

Arnzarel possesses the ability to regenerate and recover his entire body fully,( so long as he is not decapitated.) It takes about a normal mortal hour to regenerate fully though and often he must wait until after a battle is completed and rest so that he may focus to speed up the regeneration process.

Yep, this version of Arnzy is a white mage like Dende, meaning instead of using necromancy he simply has the ability to heal you with his demonic power, without corrupting you or your soul.

This is actually an area where Arnzarel the Redeemable shines over his evil primal brother as well, he is redeemable. Thus the gods have given him a break for trying to beg for power from them and have removed all their nasty little curses,(well other than the one making him ugly ) on him. Thus this version of Arnzarel is free to go about his day without having to kill a certain quota of people each day or thirsting for magic so much that it drives him insane. However he is still big and a huge target, as well as slow in his reflexes and has the same cool-down period of many of his attacks and his slow demonic regeneration as his primal brother.

Retrieved from "https://sonicfanon.fandom.com/wiki/Anti-Arnzarel:_Arnzarel_the_Redeemable?oldid=1867875"
Community content is available under CC-BY-SA unless otherwise noted.