I might be old and gray, but I can still climb mountains, cross rivers, and dig as far as 50 feet better than anyone. Who says I can't do anything?

Known as a kind and generous figure, Anthony tries his best to lead his granddaughter in the right direction. Though he may be slower and more forgetful with his old age, this wise gentleman still has a temper to match his kindness and a heart to match his enthusiasm. 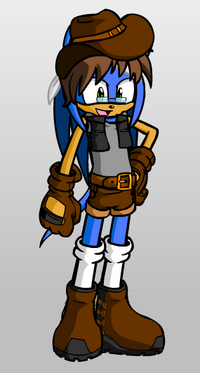 When Anthony was younger, he was shy and reserved due to his treatment at the hands of Reens' great-grandparents. As he grew older, his temper also grew. He eventually moved away from his family and started his own business.

Aside from his youth, Anthony is becoming more like the typical grandfatherly figure: wise, kind, and always willing to see the grand-kids. However, he also has a nasty temper whenever things aren't working the way they should. He absolutely adores his granddaughter, and would do anything for her. He also worries about his grandson, and does what he can to support Reens' search for him.

Not much is known about his childhood because he has never talked about it to anyone, but it can be said that it was rough, and that he acts kindly in order to combat it.

Anthony met Esperanza at an archaeology charity banquet. He told her she was the 'prettiest artifact he had ever seen.' They were married soon after and Esperanza gave birth to Carmen (Reens' mother) and Donatello (Reens' uncle).

Anthony lives and works in his mechanics shop, Thorpe's Trucks and Auto Repair, alongside his granddaughter Reens. He works mostly on cars and trucks, but has been known to assist with Extreme Gear as well.

In his spare time, he loves to travel to exotic places in order to find treasures and artifacts. His love of archaeology grew so much that he founded the League of Ancient Archaeologists (LoAA).

(Reens will eventually move to Station Square after the events of Secret Discord. Anthony will do his best to keep in touch with her.)

Though not as fast as Reens, Anthony can run at a speed of about 80 miles per hour, depending on his joints or not.

Anthony can lift about three times his own weight.

Ever since he first started, Anthony has worked in his archaeology team to uncover famous artifacts. His favorite is a blue sapphire he found in an old river.

Learning from his father, Anthony knows how to fix almost anything pertaining to cars and trucks, though he has also dabbled in Extreme Gear and robotics. He has had to fix Reens' robotic arm a few times, though she hates to admit it.

Since Anthony is 56 years old, his body isn't what it used to be. Aches and pains appear once in awhile, mostly occurring in his joints.

Also due to his old age, Anthony has started showing signs of memory loss, but it isn't too drastic.

Retrieved from "https://sonicfanon.fandom.com/wiki/Anthony_%22Tony%22_Thorpe?oldid=1847667"
Community content is available under CC-BY-SA unless otherwise noted.