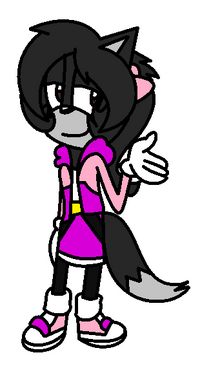 Annushka Vixi, more commonly known as Marsha Vixi, is a mobian fox, a member of the Freedom Fighters, and the leader of Team Vixi. She is also the most recent member of the Light Heroes, heroes of every generation picked by Aurora and bestowed the Sword of Light.

Marsha is an anthropomorphic fox with black and light gray on her muzzle, inside of her ears, (presumably) on her stomach, and on the tip of her tail. She also has dark brown eyes, bangs that cover most of her face, and tufts of hair covering her cheeks. Most of hair is held up in a high ponytail with a pink bow and when untied, her hair reaches to her hips.

For attire, she wears a white t-shirt, a pink and purple hoodie, a black belt with a gold buckle, a purple skirt with white trim, black leggings, pink and white sneakers with purple straps, and white gloves.

Marsha was born in Mobotropolis as Annushka Vixi to Aylosha Vixi and Evelyn Kittredge, both of who mysterious disappeared when she was an infant. She was put under Rosie Woodchuck's care alongside her older half-sister, Fiona Reynard, who was 5 years older than her.

Like the other children, Annushka was among the many who was forced to flee to Knothole Village during Dr. Eggman's coup. She was separated from Fiona, who was captured by Eggman's badniks. Without her older sister, Annushka became a victim of bullying. At her lowest point, Annushka rebuilt her identity, renaming herself "Marsha" after a previous queen in the Acorn line.

Despite this, she would eventually make friends with the kids who would later form the Freedom Fighters, becoming especially close with Julie, Bunnie, and Dulcy. She would also befriend Geoffrey St. John, who would train her in hand-to-hand combat and espionage before she joined the Freedom Fighters.

To strangers, Marsha is reserved and shy with an air of seriousness about her. To her friends and family, she is a kind and caring with a fun-loving side. Marsha is a loyal Freedom Fighter who, like all of her friends, is dedicated to their fight against Dr. Eggman and has a strong sense of justice.

Early on in her life, Marsha had low self-esteem because of bullying and thought poorly of herself, but her friends helped her gain some of it back. She also has been known to fall victim to stress and can crack under pressure. Marsha is also extremely patient and isn't one to get angry, but her temper can rise quicker during times of stress or if her friends are hurt/in danger.

Marsha has a love for reading, especially about Mobian history. She is also known to have a fondness for terrible puns. Marsha has been known to enjoy baking and has even mentioned of opening her own bakery one day. Marsha has also known to love butterflies, animals and scenery.

As a fox, Marsha was born with a naturally higher IQ than her other mobian peers, with her intellect specialty being history.

Initially, she was trained by Geoffrey St. John in hand-to-hand combat and espionage and was trained in swordsmanship by Antoine D'Coolette, but her overall abilities have improved since then.

Marsha's tail often acts as a third limb and is strong enough to pull levers and hold up Marsha's entire weight. By rapidly spinning her tail, she can briefly float over gaps bigger than a regular jump, but she can't actively fly. She can also rapidly spin her tail to act as a propeller when she's in the water, helping her to move faster.

Much like other characters, Marsha can curl into a ball to use a spin dash. She can also harness Chaos Energy that allows her to access her super form.

With all seven Chaos Emeralds (or something of equivalent power), Marsha becomes Super Marsha, a white-colored version of herself. In this form, she can fly, is invulnerable, and all of her abilities are increased. This form however, required energy to maintain and she reverts back to normal.

After having a nega wisp being bound to her Core, Marsha is transformed into Void Marsha, a violet-colored version of herself. While gaining the power of the Violet Wisp, Marsha is turned animal-like, reduced to growls and snarling and is unable to reason. Only after being freed from the nega wisp's control will she revert back to normal.

Marsha is deadly afraid of spiders. Marsha oftentimes still suffers from low self-esteem and can suffer from periods of stress that leads her to be unable to think straight.

Retrieved from "https://sonicfanon.fandom.com/wiki/Annushka_Vixi?oldid=1888562"
Community content is available under CC-BY-SA unless otherwise noted.