The author of Annamaria, considers this page to be unfinished. As such, some sections may change.

Annamaria is the finale result of Project Messiah, along with her cousins from the Space Colony Ark. Her mom and aunts were made with Celestial DNA from Professor Okami"s partner Willis, while her dad and uncles were made with Black Arm DNA from Professor Okami herself. Then the two DNAs were placed inside two females of 13 animals: wolf, seahorse for dragon substitute, mouse, boar, monkey, snake, rabbit, horse, chicken, sheep,cat, tiger, and ox.She was born after they laned on earth and made a home in the forest,but her father passed away shortly after,leaving her mother and brother to raise her.Few years later,Anna lost both her brother and mother to a mysterious man and she was alone and soon taken to an orphanage where she befriended a girl named Kalis who in turn was her cousen.Then one night she meet Selenia,chat with her,comfert her and apoted Anna and Kalis.Many events happpened but Anna remained with her friends and Selenia,she was made the sun princess when a woman came and told her,brought peace between her kingdom and the demon's kingdom,watching the kingdom when Selenia's busy,fighting alongside Memphis and Mazda to whom both lost their lives.Then Anna meet the Light twins and had a crush on Angeloz,but was shy to tell him,after all the feathers gain life,she was even closer,till one moonlit night both she and Angeloz told each other their feelings and started as a couple.She still has a few adventures from time to time with Selenia,Angeloz and all her friends,and in the future she married Angeloz and had a daughter named Selene and helps her and help friends whenever she can.

Annamaria is caring, kind-hearted and not afraid to speak her mind. However, she is determined and courageous when someone she cares about is in danger, often risking her own safety to help that person. She's pretty sociable and makes friends easily. She's usually always very cheerful and upbeat and seems to be bit of a tomboy as well and looks at the positives of a situation and loves to play with kids. She is loyal and headstrong, and she can be rather stubborn sometimes, but the bond between her family and friends is very strong.

Anna and Selenia have a mother-daughter-like relationship.Anna was out training when she saw Selenia and followed her.Soon she was founded out and talk to Selenia about some evil dogs and that she was lonely.Selenia offered her to stay at her apartment with Kalis,and Anna stay with her since.

J and Anna have a sibling relationship.J and Anna put their trust in each other when things look bad.At the time J was turned into a baby,Anna stayed behind and took care of him,there they both understand each other,and Anna protected him.She sees him as a fun cousin.

N is also like a brother to Anna and when he feel bad,Anna would try to cheer him up and to look at the bright side of things.

The 1st time she met him,she had a feeling about him.She would like to hang around Angeloz even if he shortsighted himself,she's cheered him up and listen whats on his mind.When he was turned into Diabloz the Dark,only Anna could reach him,it was soon after she kisses him on the cheek,she felt it was time to tell him how she feel.One night she found him and she tried to tell him how she feels till he blurted out he loved her,to which Anna returned her feeling.She was shocked when he kissed her,but she soon relaxed in it,and that started their lives as a couple.In the future they married and had a daughter named Selene who they both love very much.

She known Temp and his sister since she was little.She welcome them to her house along with her brother and becamme friends before he left.Years later,they meet again at New Hope,he asked Anna to watch his sister till he ruturned.Soon later he came to hang out at New hope and is still Anna's friend.

Anna is a female mobian wolf with brown fur, brown hair with red markings which is styled long in the back and short in the front with the bangs parted, a white muzzle, a white tail tip, and green eyes. The clothes she mostly wears is a light blue shirt, with light blue shorts with white, light blue shoes with white stripe, a gold heart necklace, 1st a pink tulip and later an Angelicz, a flower Angeloz grew for her. She also wore a black coat with black shoes while she was in the good Organization 13 which she helped others with her friends.

1st picture of Ann from Sunny

1st present from Lighting of Anna in sonic Riders 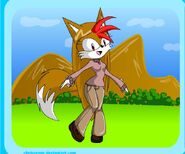 Anna on Charrie Maker as a B-Day gift from Lighting 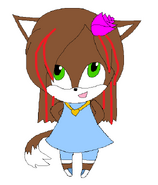 Anna as a chibi made by Wh!te 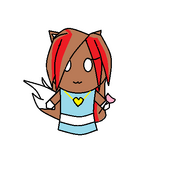 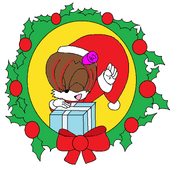 Anna as a human in Bannedstory as a gift from Sahura

A scene Ulti made with Anna in it.(She's the one waving) 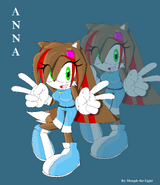 Anna as a human.Thanks Yume

Anna as an egg for Easter.Thanks Flab

Anna as an icon.Thanks Yume.

A Christmas picture of Anna from Light.Thanks lots

My 1st computer drawing of Anna with my 1st friends characters

A picture of Anna made by my sis^^
Community content is available under CC-BY-SA unless otherwise noted.
Advertisement