This is an article about Anna Lynn, a character created by Gamedezyner, TheSkullWolf, HauntedPhantom, and DerekTheHedgehog.
This is a parody article.

Everything is perfect, but not as perfect as me~ 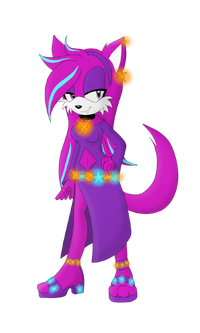 Michelle AND Barrack Obama (dumped because no longer President)

Anna Lynn is a hot pink hedgefox (emphasis on hot) who lives on mobius. She can use any weapon and can summon any element as well. All of the males want her and love her so much because she's so beautiful, but she's already dating Meta Knight, Batman, Popeye, Master Chief, Slenderman, Shadow, Sonic, Silver, Knuckles, Espio, and both Michelle and Barrack Obama at the same time. She also recently added Chef Boyardee to her list of boyfriends! She has many other secret lovers as well! None of them mind sharing her because they love her so much. It's so sweet! Along with that, she also has a pet Pegasus named Rainbow Dash, or RD for short.

While Anna doesn't consider anyone an enemy (except for Eggman, cause let's face it: Everyone hates him), mobians like Amy Rose, Sally Acorn, Mina Mongoose, and so on, hate her because she's so purrfect in every way. They're jealous of her, yet actually they wished that they could be her. I mean, who wouldn't want to be a beautiful hedgefox who gets all of the guys, is extremely smart and powerful, and can do what others can't?

...Ok I lied... She has one mortal enemy... Princess_Hawaii_Forseaishi_Kitten_Istality_The_Third

As a result of merely having to say her full name in public, Anna Lynn despises Princess Hawaii Forseaishi Kitten Istality The Third.

Her parents always mistreated her when she was little, even though she did all of her chores and made straight A's in school. She had so many friends at her school, and she was the most popular and smartest girl in her entire grade school. She was also the best player in chess club and the head cheerleader. One day, a demon killed Anna's parents right in front of her, and then possessed her. Anna then grew up taking care of herself since she already knew how to, even if she was only six. When she turned ten she met Eggman and battled him. When things looked like it was getting rough she discovered her super form as Eggman dropped a chaos emerald. Anna now today wears it around her neck. Anna also learned that she could summon any element with it as well.

When Anna was in highschool, she went through a short "scene" phase, where she dressed in offensive clothing and dyed her hair bright colors.

When Anna was eighteen she decided to become a stripper in order to earn money. Everyone loved her.

Later on she discovered her demon shadow side! She almost killed Tails and Cream when she was in her super and insane form, yet luckily the two survived. She now tries to maintain her darker side.

After finding out about her dark side she then realizes that she's a princess. It was so intense!

One day later in her life, her family was threatened. That's when she learned how to go Super Saiyan six!

Anna can use any weapon, including bows and arrows, swords, spears, crossbows, scythes, guns, knives, potions, wands, and much more! No one knows how she's able to do it, and she doesn't actually know either.

Anna can manipulate any element, like wind, water, fire, earth, light, darkness, and more. She also has a sixth sense-- telling if someone is in love. So she could actually tell that a guy likes her but she pretends that she can't notice. All it takes is a little laugh and then poof! The guy is in love with her.

She is a shapeshifter, which allows her to change her form into anything she desires. She uses this power to woo any man and scare any foe. It's also good for reaching things in high places. Anna Lynn am real super sand.

Anna can also speak pony, kirby, dragon, bird, and more! She's also immortal. Anna can heal any one, even if they're just sick.

If Anna can get her hands on a single power ring, she can become megasuperultrahyper Anna, where she grows wings and is invincible. She's only used this once when she killed Satan and threatened God.

Retrieved from "https://sonicfanon.fandom.com/wiki/Anna_Lynn?oldid=1863566"
Community content is available under CC-BY-SA unless otherwise noted.