It is our duty to cherish and protect the world in return for all the good it has done for us. Why would you want to take more from it than it provides us already?

Angelique the Wolf ( アンジェリク ・ ザ・狼 Anjeriku za ōkami) is a fictional character from the Sonic the Hedgehog series. She is an anthropomorphic Arctic Wolf (also known as the Melville Island wolf) who stands at around 3'2". She is the polar opposite of her fraternal twin, Sapphire the wolf, who possesses a more perky, energetic personality than her counterpart.

Angelique is a polite, honest and just character. She is usually soft-spoken and is very intelligent, her IQ being that of 160, and she tends to use high-level vocabulary when she speaks. But despite her wise, perspicacious image, she can still be rather naïve and superstitious and she is incredibly shy.

Angelique is a petite, anthropomorphic Arctic wolf with black fur and light turquoise eyes. She has violet markings around her eyes, on her bangs and at the tips of her hair and tail. She wears a plain lilac T-shirt, a black waist-length leather jacket with two golden buttons, some dark grey skinny jeans and a pair or black knee-length boots with lilac soles. She also sports two large, golden cross-shaped earrings both her ears.

Angelique is a kind, yet apprehensive character, who tends to distance herself from other people. But despite this, she is also hugely sophisticated and polite, using good manners at all times regardless of the situation. She is likewise a very caring and thoughtful soul who always puts others first, even if that means risking her own safety in order to help them.

To some, Angelique can come across as weak and fragile due to her acute lack of confidence. She is often afraid to try new things and frequently finds herself escaping situations she could quite easily handle if she puts her mind to it. Doctor Eggman is one of the few characters that Angelique acts hostile around, ignoring all of her worries and brushing off any concerns she might have, when in contact with him.

But overall, Angelique is a sweet and quiet young woman and is the 'Yin' of Yin and Yang.

Ever since she was little, Angelique has shown a great interest in nature and forestry. As a child, she was often caught climbing trees and playing in the forest outside, talking to small animals or studying the anatomy of different woodland creatures and plants.

Angelique is often seen high up in the trees, sketching different birds and mimicking the songs that they sing. However, due to her keen interest in birds, she is often mocked by some of the others (including Rouge especially) and sometimes even jokingly teased by her own sister. But despite this, Angelique maintains and continues to pursue her hobby with pride.

In addition, Angelique is also a huge fan of parkour. She tends to enjoy climbing and jumping from tree to tree, especially at nighttime when it is dark. Because of this, Angelique has adopted skills such as becoming a great athlete and gymnast and has also become physically very fit.

As a result, Sapphire had soon decided to invite Angelique to become a part of the self-proclaimed 'professional detectives', Team Chaotix, on account of her extreme agility and know-how, and also considering how Sapphire used to be a rather close friend of theirs. However, this offer was before long dismissed for Angelique showed no sign of interest in detective work.  Equally, she disliked how Vector attempted to make Tails and Cosmo admit their feelings to one another since she believes that love comes naturally and not by force.

During a conversation with Espio, Angelique had learned of the famous Freedom Fighters, Sonic and friends, and about their battles against the renowned Doctor Eggman. After having heard his plans of taking over the planet, she became sickened at the thought of him even going as far as to destroy the natural world in order to sate his cravings for evil and destruction. Soon Angelique became part of the Freedom Fighters' band and is still fighting to this very day.

Angelique's key ability is that she can heal all forms of life (both plant and animal) using the power of the chaos emeralds. She is able to fade wounds into nothingness simply by placing her hand upon it. However, unlike Sonic and Shadow, Angelique cannot use Chaos Regeneration, and thus cannot prevent death if the wound is too great, nor can she bring back someone from the dead.

In terms of combat, Angelique can be quick and stealthy and shows great agility. She also appears to show some understanding of martial arts, which can be suggested by her ability to take down her opponents in a swift, skillful fashion.

Like many other characters in the series, Angelique is able to run at super speed, though she is not as fast as Sonic or Shadow. Regardless, she is still remarkably fast and possesses quick, graceful movements and fast reflexes, something which comes in useful especially during battles.

Like most, Angelique also has several weaknesses, one being her lack of confidence especially. If Angelique is put under pressure, she often feels faint or dizzy, not understanding what is going on around her and sometimes even falling unconscious. She tends to dislike being around others, and often feels like she isn't doing well enough. This constant fear can chip at her abilities and make her more likely to slip up in a situation, and even during battle.

Another problem is that Angelique is overly trusting and naïve, and prone to making silly mistakes such as giving a second chance to those who cannot be trusted. She can be easily tricked or manipulated into doing things that can put both herself and others in danger, which is a big issue for the team.

Angelique also suffers from agoraphobia, meaning even the thought of being in a crowd or around in public makes her feel uneasy and sometimes even leaves her passed out if the symptoms worsen. However, she is not much for admitting her fear and will try to hide it as much as possible. 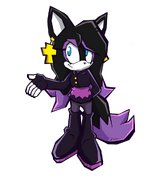 Stats and Concept Art
Add a photo to this gallery
Retrieved from "https://sonicfanon.fandom.com/wiki/Angelique_the_Wolf?oldid=1767712"
Community content is available under CC-BY-SA unless otherwise noted.