Start a Wiki
This is an article about Angelique Solaria, a character created by Proud-To-Be-Otaku on 02/6/2016 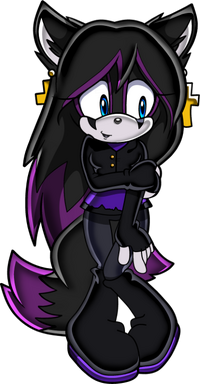 Angelique the Wolf ( アンジェリク ・ ザ・狼 Anjeriku za ōkami, born October 27) is a 3"3, black and violet anthropomorphic wolf at the age of 19 years. Her eyes are wide and a light cyan-blue in color. Angelique's fur and hair is dark charcoal, with violet highlights on her bangs and at the tips of her hair. Her muzzle, inner ears and arms are ivory to go with her Gothic apparel and style, though her natural skin tone is in fact a light peach, like that of her sister Sapphire.

She is also extremely timid and calm, yet can become nervous when she meets new people for the first time. The only person she feels truly safe to be with is her sister, regardless of how loud and immature she may be. The two fraternal twins together form a Yin-Yang like relationship, each possessing their own unique powers that combine making the enemy merely powerless to defeat them. However, if alone, Angelique may face many problems - especially due to her lack of confidence and gullibility.

During battle, Angelique starts off warm, trying to talk the enemy out of it and making minor threats if need be. Only if the foe refuses to back off will she become much more bitter and hostile towards them. If she makes a threat, she has every intention of carrying it out.

Constantly bullied by others, Angelique has developed an intense fear of socializing and trying to mix in with people, proving guilty of her reserved personality. This also includes the members of Team Babylon and being called "useless and pathetic'" by the Team Dark's leader, Rouge. Little does she realize her true strength and power.

Angelique is just a normal girl from a normal family; she was raised in a family of four children: Sapphire, Dusk, Dawn and herself. As a child, she loved nothing more than to play outside and explore the world - or her world, you could say.

Like most young children, Angelique had a good imagination and saw her backyard as a whole new world. She played many games with her brothers and sister, and had an overall incredible childhood.

But then school happened. She loved to study and try out new things, so she quite enjoyed her time there. However, despite her loving and gentle personality, she was immensely bullied by her classmates and peers - mainly for her obsession with nature. This lowered her self-esteem drastically, causing her much pain and fear. Over time, she only continued to become more quiet and reserved, and never even attempted to socialize with others.

As she grew up, Angelique slowly developed a keen interest in becoming a freedom fighter along side Sonic and the others. She had only ever seen the heroes in the papers and any in activity announced by news' reporter Soar the Eagle on the television.

She felt alone. Worthless. She felt that the only people who could accept her as a friend were those whose hearts were of pure gold and only knew how to care about others, regardless of their strengths and weakness; that maybe not fitting in themselves could mean they will understand how it feels to be different - unique.

One night, Angelique set off on her journey to find them. She knew her optimism was unrealistic, but little did that change her objective . She was determined to be one of them; she was starting to become delusional.

Immediately after was it that she came back to her senses. Clueless on why she would even think she could accomplish something so large, she headed back to her home town, where she ran into a small café and decided to stay there for a short while. Only moments later did she realize the blue hedgehog sitting at the counter.

Angelique's main power is the ability to heal all forms of life - plant or animal - using the energy from the chaos emeralds. She is able to fade wounds, whether they're big or small, into nothingness within just seconds. However, despite this, Angelique is unable to use [Regeneration|chaos regeneration] and therefore cannot bring someone back from the dead.

Only when angry or afraid, she produces a purple, smoke-like energy which she can fire at enemies. It can shock and disable the enemy for a short period of time, like [Shoot|thunder shoot], but this attack will weaken her after use as it requires a lot of energy, often leaving her faint or even passed out.

Angelique does not possess many skills like the others do, but she can run quite fast in comparison to the average girl of her age and she has good agility. She has also been trained the arts of karate and is reasonably stealthy, too.

Angelique suffers from several environmentally-caused disorders, anxiety and depression especially. Her intense phobia of social situations and communicating with others limits her ability to help others, even when she knows that only she can help at that specific time. She has fainted numerous times, in the past, due to the constant fear of the people around her, only feeling safe when around Sapphire.

She also has a great hatred towards those who make any attempt to hurt or damage the environment and wildlife. She has a strong passion for ensuring that nature stays nature and that no innocent animal or plant is to be hurt due to threats like pollution and global warming. As loving as this may sound, it can be a problem in some situations, such as where she has to choose between helping the freedom fighters in battle and the environment.

Another issue is fear and stress. When Angelique undergoes any form of negative emotion, a violet-colored energy builds up inside of her, which she then releases in the shape of [Spear|spears] at the enemy. However, this wears her down immensely, causing her to weaken to a point where she often passes out.

Retrieved from "https://sonicfanon.fandom.com/wiki/Angelique_Solaria?oldid=1867807"
Community content is available under CC-BY-SA unless otherwise noted.