I still can't believe your still babbling, Mimica. Look at her. The little girl that you made fun of when she was 7? Fast-forward a decade and now, she's probably one of the most popular celebrities in the world. Look where you are now Mimica. You're in a man cave. Alone. No one to talk to, completely disconnected from the world. She honestly couldn't care less about you. She moved on, you should too.

— Angelina while being held hostage by Mimi 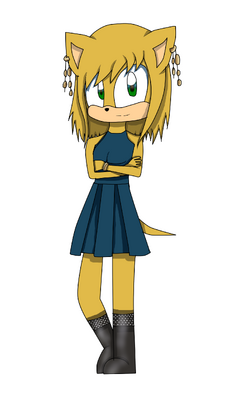 Angelina the Porcupine is a fan character created by Darkest Shadow. She is a fashion model and rhythmic gymnast who attends Phyilia University as a fashion student. She is on the cover of several magazines and is the current CoverGirl spokesperson for 2017.

Angelina Tigerlily is a nineteen year old porcupine from Mariala City. She is a fashion model who used to compete in beauty pageants. Nowadays she decided to pursue modeling as a life career and started taking pictures with her friends. She was quickly recognized by big labels and asked to be in several photoshoots. Though she did not win in Lacancory's Top Model, she moved on to big industries such as being a model for New Era Magazine, and the new CoverGirl for 2017.

She graduated from Mariala High School in 2016. She tried out to go to the MCA, but unfortunately did not make the cut, and was sent to the public school of her gigantic city. She decided to major in Fashion Marketing and Merchandise, and currently now attends Phyilia University in Mercedes, Vegalo.

Angelina is nothing how she seems. Though she is generally friendly, she hides something on the inside. While people who didn't talk to her knew her as the shy, friendly, quiet girl in school, she actually turns out to be brutally honest, funny and sarcastic. She can be mean sometimes and has strong opinions on everyone she meets.

Angelina also can be pretty short-tempered at times. Small things used to upset her very easily. Nowadays, she calmed down, but when she's angry she is a very scary porcupine. Her demeanor may make her come off as generally harsh, but really she is just angry and it takes her as long as a week for her to bring it down.

Standing at 3'5, Angelina is a golden colored porcupine. Her hair is a golden color and her hair goes down a bit below her shoulders. Her eyes shine a dark green. Her muzzle and ear color are peach. Her arms and tummy are the same color as her body color.

Currently, she keeps it simple with her spring-like outfit. She wears a cerulean blue flared dress that goes above her knees. For footwear, she wears shiny black rainboots with a white polka-dot design on the top half. She also wears 14K gold earrings and a special expensive 20K bracelet on her left wrist.

An interest that followed her for a while, Angelina has a passion for rhythmic gymnastics. A form of gymnastics that really speaks shows talent, beauty, grace and elegance, Angelina felt like this was a dream she wanted to pursue. Angelina has been training ever since she was thirteen, and started to follow competitions.

Though she is good at all four events, Angelina really shines using the ribbon. A skill that was originally hard for her to master, Angelina creates several patterns and designs while also being able to spin and stretch her legs high. She has made it all the way to a regional championships for this event, where she received a silver medal for the event.