I went through a lotta trouble to get this baby, so it better have been worth it! Good news; it was worth it.

— Mackenzie the Tiger on Angel

Angel is a blade wielded by Mackenzie the Tiger in the Lamak Zone continuity. It continuously proves its worth in Mac's battle, always able to do what a sword can do... and more! 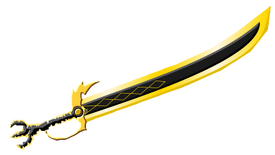 Angel appears to be slightly unique in its appearance, combing that single-edged curved blade with that of a saber and the long hilt with that of a Zweihander. It also shares the holding area with that of a backsword, but the rest of its appearance seems to resemble a cutlass. Though it is meant for a one hand (which is convenient as Mac has his fair share of weapons), Mac is no stranger to using two for extra force and balanced blows.

Color-wise, the center of the blade and hilt is black, while the outlines of both are yellow. While the blade has a shiny exterior, the hilts is far less polished, leaving a crumbling look. The blade also has several rhombuses all chained together on each side.

As Heaven, the blade glows completely yellow-orange, and it gains chainsaw edges.

Mac, as of right now, is its only living canon wielder, and he's had it ever since A Briona Bout in the continuity. He is also the most trained with it and its capabilities in history. However, its previous users most likely had a notable amount of skill with the cutlass, too.

In Mac and Vendeta's non-canon Bloodied Hands Arena match, Vendeta grabbed Angel and he used it for an amount of time before Mac retrieved it.

In Kennedy and Xavis' Bloodied Hands match, Kennedy also used Angel, but after being disarmed it wasn't used for most of the rest of the match.

Angel was the ability to channel power through it, allowing it to be a conduit for several types of energy. Since Mac is its primary wielder, it usually helps him with channeling electricity in it, but that is not the only one it is used for. In Kennedy and Xavis' BHA match, Kennedy was able to charge Chaos Energy in it, and in A Cimmerian Search, when Mac was using the Aphotic Orb, he was able to use it as an extension for his newfound darkness-manipulating abilities as well.

Angel's first true picture, done by Aethervallum on the SFCW!

A shocking version of the picture above, also done by Aether!

Mac vs Kennedy with a prototype version of Angel, thx!

Kennedy vs Xavis Pyrovolt by XophPsycho, a recreation of their BHA match with a prototype version of Angel!

Mac with Angel done by Sunny/AppleChip on the SFW Discord, thank ye!

Mac and Angel done by Sky the turquoise Cat on the SFCW! 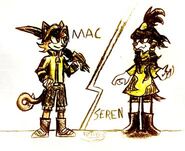 A battle pic between Mac and N8's character Seren, thank you N8!
Add a photo to this gallery

Retrieved from "https://sonicfanon.fandom.com/wiki/Angel_(sword)?oldid=1851723"
Community content is available under CC-BY-SA unless otherwise noted.