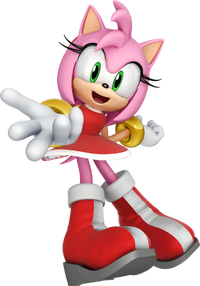 Unlike Sonic, Tails, Knuckles & other characters who were introduced during the "Classic" era, Amy looks like her modern design in this era, mainly because she's 12. And unlike her canon counterpart, she never spouted four extra years. Also, in "Sonic's Weird Birthday" and "Wir sind Menschen", she wore a red cheerleader's outfit instead of her usual dress.

Amy still has super speed, the Spin Jump, Spin Dash and all the standard abilities she had in the games. And of course, she can still do all those wonderful hammer-based attacks. Being a hedgehog, she also possesses Hedgehog Sense.

Amy also decides to get gifts for Shadow and Rouge on their birthdays, specifically an ice cream maker and a Crock-Pot, her reasoning being that they don't usually have time to cook and that they could follow it up with a tasty treat after supper. Later, at the birthday party, she is the first to notice Sonic and Tails ' arrival. Amy is also the first to give Shadow and Rouge their presents, barring Mephiles . She even serves as the flag girl for the motocross race between Sonic, Tails, Shadow and Rouge.

Amy makes a minor appearance in this story, where she too has joined The Wave along with Cream despite not being old enough to go to high school. Initially, she is proud to be a member of the movement and questions Sonic and Tails when they try to dissuade her and Cream from it. Nevertheless, she agrees to look up the Tedescan Civil War. Presumably, she has moved on from The Wave after the police showdown at James F. Charleston High School, albeit heartbroken.

Amy – like Sonic's other friends – is in attendance at the International Festival of Community. She agrees with Sonic's statement about Knuckles and Rouge not arguing and also expresses her happiness about meeting Hope and tells her about being Sonic's girlfriend, much to his dismay. She also smacks Shadow for referring to Cream as a "pest" and tells him that she couldn't make it to the concert due to a school recital she had.

Sonic Tells the Truth to Amy

One day, Amy glomps Sonic again, and is surprised when he explains why he's been running from her. She is moved by his explanation and assures him that he couldn't mess anything up with her before giving him a kiss. After the kiss, she suggests a nice, romantic meal with each other and lets him pick where they go.

He Wanted to Thank Her

Amy is surprised to receive a visit from Shadow, but nevertheless welcomes him into her house. When she asks why he came over, he reveals that her words on the Space Colony ARK had a powerful effect on him. She also gives him a hug when he asks for one. She even calls him "handsome", which results in him calling her "cute". Furthermore, she allows him to stay for a while.

Amy is one of Sonic's fellow stuntwomen, though unlike [[Miles "Tails" Prower (BearfootTruck's Universe)|Tails], she isn't part of his band Sonic and the Diesel Cats, though she does get a free pass for one of their shows. She is also unaware of Sonic's career as a car thief…that is, until she receives a voicemail from him asking her to join him on a job, which turns out to be helping him to take down a car thief named Shadow. She is partnered up with Knuckles, and together, they start off by stealing a 1977 GMC Suburban nicknamed "Carmen", though Amy objects to Knuckles' proposal of using brute force and instead uses more subtle methods to steal the vehicle. After delivering it, Amy expresses her concerns about Shadow to Knuckles, but decides to go along with Sonic's plan for now, doing some more stunt work and thefts in the process.

The next day, Sonic invites Amy to a barbecue being held at Rouge's mansion. While she likes the idea, she is nervous about doing so because she thinks Rouge is a lesbian and has been making unwanted advances on her. However, she decides to go when Sonic and Tails elect to protect her from unwanted advances. At the barbecue, Amy ends up sitting next to Shadow at first, but asks him to move over so she can sit next to Sonic. When Amy asks Shadow how he met Sonic, she becomes enraged when she learns that the Ultimate Life Form threatened him and attempts to bonk him with her Piko Piko Hammer. However, Rouge intervenes and makes Amy and Shadow hug. Amy enjoys the hug and compliments Shadow on being cuddly. After complimenting Rouge on her cooking, Amy sits back and enjoys the rock show that Sonic and the Diesel Cats put on. After the show, Amy thanks Sonic for keeping an eye on Rouge, though she teases him for allegedly liking Rouge's cooking better. She also invites Sonic out to eat the next day.

After doing some more stunt work the next day, Amy steals a custom van without Knuckles' help, which draws Shadow's suspicion. She is further shocked when Shadow threatens to kill Knuckles. Nevertheless, she is grateful when the Ultimate Life Form spares his life. Later, after joining Sonic for supper at Chili's, she has a good time…that is, until he reveals that he has a crush on Shadow, which upsets her greatly.

Though really upset by this revelation, Amy cools down the next day and calls Shadow "handsome" before giving him a hug, though she is curious as to why he’s visiting the movie set where she, Sonic and Tails are working. Nevertheless, she's happy that he’s happy. After a death-defying stunt, Amy is excited by the possibility of going out for ice cream and stuffs herself full, even joking about it with Rouge. She then runs off with Tails and Knuckles upon Sonic's orders.

The next day, at another movie shoot, Amy asks about Sonic's night with Shadow and suffers a nosebleed and faints when she learns that they took a shower together. After being revived, she takes a little walk with Sonic and the rest of the gang. She then attends a karate demonstration at a local theater and does some more car thefts. After Shadow is brought to justice, she receives a good sum of money from Sonic.