Start a Wiki
This is an article about Amy Rose (Animated), a character created by Majin Ghidorah on 11/22/2015. 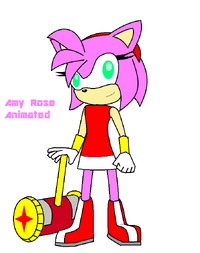 Amy Rose is the main love interest of Sonic in Sonic Animated. She is voiced by Cindy Robinson.

She was sent with her boyfriend Sonic and the others to Earth after Eggman's robots ruined most of their homeplanet Mobius nature.

Amy is an pink hedgehog with bright green eyes and wears an red dress that ends near her knees and has similarcolored boots. She wears an headband on her head and golden bracelet with white gloves.

She is an very caring character and shows comfort to her friends when they need it. She is in love with Sonic and she knows that one day he'll confess for her. But Amy has an short temper when it comes to battle so bad guys better watch out for her hammer.

Amy Rose first meet Sonic when they were kids at Little Planet after he rescued her from Eggman's spacecraft. She is mentioned to have an family that mysteriously disappeared when she was young and she wants to find out how they disappeared. It is also know she got her hammer when she was 8 year old.

Amy's only known powers are summoning the piko piko hammer and her enhanced strength, being strong enough to use her hammer to crush steel and rocks.

She has great agility, stamina and great knowlage in using weapons like her hammer and sometimes an sword. She also has great hearing and can run after Sonic without getting tired for nearly an hour. Like Sonic and Shadow she can do spindashing, but that results in tearing her lower part of her dress.

Amy is great in using combat weapons like her Piko Piko hammer, at some points she is good at using swords.

Like many others, Amy is not invulrnable against bombs, explosives, gunshots and lasers. She also can get tired after running alot of time or either being in battle for a long time.

Retrieved from "https://sonicfanon.fandom.com/wiki/Amy_Rose_(Animated)?oldid=1800687"
Community content is available under CC-BY-SA unless otherwise noted.