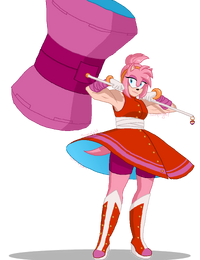 Amy Rose is a major character in the Future Held series, and appears in many other fics in ScorpioFlame's Universe . For her canon counterpart, see here .

Amy is a Mobian Hedgehog, and is quite tall. She has light pink fur that is relatively short, but is usually kept up in a high ponytail, as she maintains a rather active lifestyle. Her muzzle and arms are a light tone, and she is extremely buff. She has light blue eyes, unlike her canon counterpart, whose eyes are green. This design change was done to tie together the blue elements in her costume.

Amy wears a red overcoat-like dress that has magenta embellishmets on the skirt, and a blue lining. She has wraps around her waist and arms, similar to her design in the Sonic Boom series. Her hair is pulled up into a high ponytail, and she wears an orange headband that ties in the back. She also wears magenta shorts, and bright red platform boots.

Amy Rose is known to be kind and good-hearted, always going out of her way to help others. She always puts others first, even if she doesn't know the other person very well. She is incredibly compassionate, as she always tries her absolute hardest to help everyone she comes across who is in need. However, this compassion is not completely a positive thing, as she often works far too hard and overextends herself trying to help everyone she meets. Unfortunately, this is worsened by her extreme stubborness, as she always refuses to ask for help when she needs it, out of fear that she may be burdening others.

When she was younger, she revolved her entire life around Sonic. She first met him when she was twelve, and he rescued her from Neo Metal Sonic. Amy developed a crush on him, spurred on by a combination of Hero Worship and Compulsory Heterosexuality. Her pre-teens would be spent completely obsessed with this crush, and every time she stopped to consider the fact that she didn't actually like him as anything more than a friend, she would force herself to chase after him even harder. She didn't want to consider the idea that she may not be straight, as at the time, she saw that sort of thing as strange and unnatural.

After Sonic dissapeared, Amy took it the hardest, as she had been developing her entire life to revolve around him. However, she grew past it, becoming a much stronger woman on her own. She became her own person, strong, compassionate, and brave. She also came to terms with her own sexuality, and proudly identifies as a lesbian.

While she has not appeared in any published fanfiction, she is one of the main characters in a work-in-progress fic titled Sonic: Future Held.

Retrieved from "https://sonicfanon.fandom.com/wiki/Amy_Rose/ScorpioFlame%27s_Universe?oldid=1864199"
Community content is available under CC-BY-SA unless otherwise noted.