< Amy Rose
View source
This is an article about Amy Rose/Mobius Redrawn, a character created by Konnichiku on 03/7/2015. 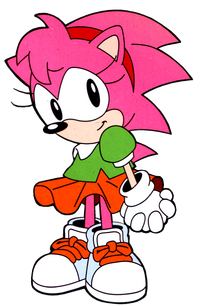 Amy Rose is an eight-year-old hedgehog who's one of the many friends of Sonic. She is friends with Sally Acorn and Mina the Mongoose.

Amy is a pink hedgehog who wears a green blouse and an orange tutu. She wears a red headband and blue tennis shoes with orange laces. She wears white gloves with white rings on them and has a white collar on her blouse. She has black eyes.

Amy is an optimistic tomboy; she's a skilled fighter and not afraid to jump in and get her hands dirty. She is best described as a "spastic, kid-type character." Amy's always coming up with new ideas, if she can't think of one, she'll ask around for one. She tends to exaggerate things and often uses hyperboles. She acts on an impulse. She also says her friends' names in various weird ways, shouts to ride operators to lock her in after taking her seat on roller coasters, and sings loudly in the car to music she likes (though that could be considered normal.) People who meet her will say she's very strange, but when they get to know her, they find she's a good friend. She also knows a lot of big words, which makes her quite unusual for an eight year old. She has interests that seem abnormal for a girl her age, like fortune telling and old music. She can be shy around strangers but is usually friendly. She prefers to be inside playing video games, reading comics, or hanging out with her friends. Despite her tomboyishness, she loves Barbies and other dolls, and has a huge collection of fashion dolls from the 60s to present, just like her music collection.

Amy was born in 1985 in Station Square. At some point in her childhood, she became interested in mystical things like fortune telling, and bought a set of tarot cards. Her parents did not approve, and according to Amy, yelled "Amy, you aren't supposed to do those things!" When she turned 8, she met Sonic the Hedgehog for the first time. She spent most of her life after that hanging out with him.

Sometime later, she met Sally Acorn and Mina the Mongoose and discovered that they had a lot in common; they made friends. After meeting the Spice Maidens, Amy, Sally, and Mina decided to form a karaoke-based girl group.

Amy possesses super speed, apparently mastered by trying to keep up with Sonic, and high-jumps.

Amy has the ability to foresee the future with her tarot cards.

Amy can swim, dowse, use tarot cards, use a crossbow, sing, dance, and use a hammer. She loves playing the maracas for whatever reason.

Amy cannot swim and will drown when put in water without any air bubbles nearby.