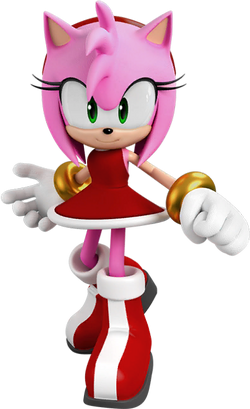 Amy Rose is a young, carefree Mobian hedgehog who has had a crush on Sonic the Hedgehog for years. Originally starting out as just one of Sonic's most devoted young admirers, she would mature into one of his most trusted allies and has sworn to protect the world from the evil scientist, Dr. Eggman and his Egg Army. Her loyalty to her friends is without question and her improving skills have assured her importance to the cause. She is also the leader Team Rose.

Retrieved from "https://sonicfanon.fandom.com/wiki/Amy_Rose/Marshalia13%27s_Universe?oldid=1785549"
Community content is available under CC-BY-SA unless otherwise noted.