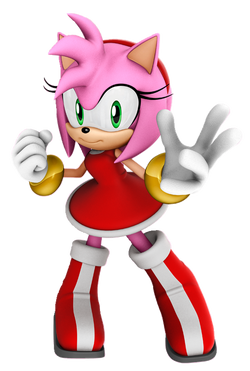 Amy Rose (nicknamed Rosy the Rascal) is an 12-year old pink hedgehog infatuated with Sonic. She's to be voiced by Jennifer Hale, ever since Mandy's voice on Totally Spies!, succeeding from Jennifer Douillard, Lisa Ortiz and Cindy Robinson respectively.

A fortune teller, she believed that she and Sonic were to have a destined encounter at the Little Planet. After chasing him, she was kidnapped by Neo Metal Sonic, later being saved by her hero. (Sonic CD)

Amy later took part in the six Chaos Emerald Grand Prix, in which Sonic also took part, driving her car, Breeze. (Sonic Drift; Sonic Drift 2) She also helped Sonic and Tails steal Dr. Eggman's Chaos Emeralds from the Gameworld amusement park tower (Sonic the Hedgehog's Gameworld), and, after overhearing Eggman's plans, took part in the World Grand Prix to find the Emeralds again, presumably to get attention from Sonic. This new car possessed the ability to transform into a hovercraft to transport over water. (Sonic R)

Returning home to Station Square, Amy resumed her normal life, wondering where Sonic was, when the Egg Carrier flew over the city and a blue flicky escaped, fleeing the robot Zero. Amy made it her mission to help the flicky, meeting Sonic on the way and helping him defeat Chaos by bringing him an Emerald. (Sonic Adventure) She was later summoned to Maginaryworld with Sonic, Tails, Knuckles and Eggman to help restore the Precioustone, in which they succeeded. (Sonic Shuffle)

Upon hearing of Sonic's arrest, Amy travelled to Prison Island in the hopes of rescuing him, somehow obtaining a security card. She was saved from Eggman by Tails, and succeeded in freeing Sonic. She tagged along with him, Tails and Knuckles, travelling into space and convincing Shadow to join them in saving the world. (Sonic Adventure 2)

Amy later helped Sonic, Tails and Knuckles stop Eggman from acquiring the Chaos Emeralds and turning animals into robots. (Sonic Advance) Losing track of Sonic again, she saw his picture in a newspaper and went to find out where it was taken; there, she met Cream and was reunited with Big, who were looking for Chocola and Froggy respectively. They joined forces to achieve this, eventually helping defeat Metal Sonic, who had taken control of Eggman's forces. (Sonic Heroes)

Add a photo to this gallery
Retrieved from "https://sonicfanon.fandom.com/wiki/Amy_Rose?oldid=1842597"
Community content is available under CC-BY-SA unless otherwise noted.