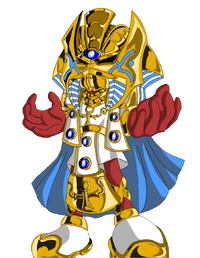 Amenaamon wears attire and armor that is heavily influenced by Egyptian designs, wearing shining gold armor and silk-white cloth, though it is debated as to whom influenced whom.

His head dress has an eagle-like motif, with stylized oblong protrusions with blue and white stripes along the front, again resembling those of Pharaoh head dresses. The eyes are narrow and focused, much like the other Anset Pantheons, and has blue markings that stretch to the sides of the mask. A sapphire gem sits in the forehead of the mask, with a gold plaque-like crest that sits above it. The sides of the mask have protrusions that go both up and down, with the upper ones having inward curves while the lower ones resemble teeth, again with blue and white stripes along the front.

Around his neck is segmented gold plates that form a necklace that sits upon his chest, with a white tunic that has an ankh of solid gold pressed upon the abdomen. The tunic extends to his knees, with a gold waist guard that holds the fabric close. A long white and gold loincloth hands both front and back, attached to the belt, with socketed sapphires similar to the cloth on the shoulder pads. The bottom of the loincloth is made of solid gold with a white ankh on its faces.

Gold cloth wraps diagonally along his shins, which lead to white shoes with thick gold running along the sides, bottom, and toe caps.

As one of the Anset Pantheon, Amenaamon maintains a calm and collected, almost uncaring, demeanor when he has to deal with mortals. Despite his disposition appearing callous to others, the ancient Echidnas adhered to his power and status as a God, especially in the times of the Sundering. In kind, Amenaamon saw the Echidna as more than just subjects or worshipers, and has become the closest to the Echidna in terms of active involvement.

Though not known if it is solely his gift or if the entirety of the Anset Pantheon is capable, Amenaamon is capable of sensing power within individuals and often becomes close with them; this is demonstrated when Amenaamon chose Edmund, an ancient ancestor of Knuckles, to guard the Master Emerald on Angel Island out of fear of Enerjak finding it within the Higher Planes, instructing him with guarding it with his life, and even unlocking the Echidna's latent powers to help him do so. Ever since, Amenaamon has kept watch over Edmund's descendants as they in turn took to becoming the next guardian.

Despite his role and personality as a guardian, Amenaamon also has a destructive side. Amenaamon has a violent grudge with the ancient demigod Enerjak, who attempted to overthrow Amenaamon and instate himself as the new God of chaos. Amenaamon believes Enerjak to be a blight on Echidnakind and not worthy of either life or death.

Millenia ago during the dawning of the ancient Echidna tribes, the Anset Pantheon was formed by a group of seven individuals who are said to have shaped and given life to the Echidna race. Amenaamon was one of these seven, and bestowed upon his children the ideals of kinship, loyalty, devotion, and inner strength.

Amenaamon, during his time as a mortal, was the first to encounter the Master Emerald--a jewel of great size in which it is said all life on Earth had originated from, and is said to be the heart and soul of the planet taken form. The Echidna felt the need to guard and protect it and, with his six fellow companions, became the Anset Guardians. However, as they reached the end of their mortal lives and with no others to take their place, the Master Emerald bestowed upon them its limitless powers, transforming them into god-like beings. Each member of the Pantheon were given an emerald that held a small amount of the Master Emerald's power in which would help them in their duty of gardianship. It was then that the Anset Pantheon was born, and in turn the Echidna race as the Pantheon used their powers to create their "successors".

While the others of the Pantheon were content with leaving the Echidnas to live and let live, Amenaamon kept constant watch and vigil over his "children". He watched as their civilizations grew and evolved into the Knuckles and Nocturnus nations, waiting for the day in which others would take up the mantle of Guardian.

However, in the year 3440 BC, the Echidna Enerjak began to plot against the Pantheon, believing that he would be able to overthrow all seven of them and become the sole God of the Echidna races. With help from the Nocturnus clan and the ability to siphon the energies from the planet, Enerjak was able to invade the Higher Plane of the Pantheon and defeat the other six gods one by one, taking their emeralds and strengthening himself as he drained each one. This lead to a battle between Enerjak and Amenaamon which say lasted for forty days and nights, until Amenaamon used the power of the Master Emerald to destroy Enerjak. Fearful of Enerjak's power and that one day he might return, Amenaamon scattered his armor, his body, and his soul to the four corners of earth, and had sent the seven chaos emeralds and the Master Emerald from the Higher Plane to Angel Island.

With the Pantheon drained of most of their powers, Amenaamon sought to appoint a new Guardian of the emeralds in the form of a young Chao. After communing with the Master Emerald, they both infused their powers into the little creature in which became the entity known as Chaos. Chaos, like Amenaamon himself, found it his life duty to protect the emeralds from invaders.

However, during the war between Knuckles and Nocturnus in which the Knuckles clan's leader Pachacamac found and invaded the Altar of Emeralds, in which he invoked the wrath of Chaos and decimated most of the Knuckles clan, yet sparing Tikal.

Amenaamon was infuriated. He attacked Chaos and had would had destroyed him had it not been for the intervention of the Master Emerald. Amenaamon demanded Chaos be destroyed, stating that he had wiped out his children, but the Master Emerald retorted that it was the Echidnas who had attacked the Altar, and that Chaos only did what they had both agreed was his task: to protect the emeralds at any costs. Coming to a stand still, Amenaamon remained that he no longer wished for Chaos to guard the emeralds. However, Tikal intervened the argument in which she volunteered to be the guardian. The Master Emerald compromised that it would seal away Chaos within it, never to be released upon the world again; but it demanded Tikal as tribute as repentance for the rest of the Knuckles clan. Despite Amenaamon's denials, Tikal accepted the responsibility of the clan, and so was sealed within the Master Emerald alongside Chaos. It was then that Amenaamon renounced his ties with the Master Emerald, returning to the Higher Plane for the next three thousand years and leaving the Altar with no one to protect it.

Despite no longer being a guardian of the Master Emerald, Amenaamon returned to the lower plane of Earth to oversee the remaining Knuckles clan population on the now-floating Angel Island. The clan had rebuilt its civilization; pyramids, ancient water ducts and underground cities were created in his absence. With renewed passion in his heart, Amenaamon returned to finding a suitable guardian for the emeralds, admitting to himself that he could never forsake his sworn duties. Amenaamon saw potential in the Echidna Edmund, who would come to the Altar and pray to the Pantheon. Appearing before him, Amenaamon talked with the Echidna, who knew about the Knuckles clan's past and the duties of the guardian. Amenaamon was pleased with the Echidna's words, and so appointed him as the knew guardian of the emeralds.

With the help of Edmund, Amenaamon helped relocate the Altar of Emeralds to deep within the Hidden Palace--a place of immense chaos energies that had formed into solid crystal. Amenaamon told of Edmund the importance of this place--it was the "heart of the planet" and where the Master Emerald had come into being. Much to both of their surprise, the chaos emeralds grew to enormous dimensions when they were placed upon crystal pedestals. The both surmised that the chaos emeralds were drawing power from the Master Emerald as long as they remained here; thus the Super Emeralds were born.

For centuries thereafter, Amenaamon would commune with and aid Edmund's descedants as they each became the next emerald guardians; Edmund, Karval, Sojournet, Thunderhawk, Athair, Sabre, Locke, and eventually Knuckles.

Amenaamon is considered to be a God, or at least a God-like entity, due to the powers he has and can control. Like all deities, Amenaamon is immortal; he has no need of sleep or sustenance including water and oxygen, is not inhibited by age and suffers no ill effects from aging, and is immune to natural disease and illnesses.

His kinship with the Master Emerald and title as the God of Chaos has given him the greatest of control over chaos energies, to the point where he was once able to potentially manipulate and even rewrite space and time according to his own will, as displayed when he had created the Higher Plane in which the Anset Pantheon dwell within. However, since his encounter with Enerjak a lot of his power had been lost or sealed within the Chaos Emeralds. Despite the huge loss in power, Amenaamon remains a force to be reckoned with. His powers still allow him to manipulate space around him and the environment within, as well as the ability to drain and siphon chaos energy from those that wield it.

Physically, Amenaamon is the weakest of the Pantheon, though his strengths are immeasurable compared to the mortal Mobians; his strength is enough to shatter small cliffs, and lift several tens of tons with a single hand. Though his strength is immense, his speed is not so much so, though his manipulation of space allows him to effectively teleport from location to location, which supersedes this weakness.

Aside from physical strengths, Amenaamon also has some mental strengths in the form of psychic abilities. He is able to astral project his body across huge distances as well as through different planes, and is his preferred method of communication, as well as also being able to communicate with others telepathically.

Amenaamon's initial colours and design
Add a photo to this gallery
Retrieved from "https://sonicfanon.fandom.com/wiki/Amenaamon?oldid=1552665"
Community content is available under CC-BY-SA unless otherwise noted.