Start a Wiki
This is an article about Amber the Hedgehog, a character created by Flowersarepretty on 09/11/2015.

The author of Amber the Hedgehog considers this page to be unfinished. As such, some sections may change.

Why would they choose you over me? I obviously am the more powerful one!

Amber the Hedgehog is a character set to appear in Sonic the Hedgehog and his Awesome Friends. She is from Silver's future and comes to the present with harmful motives. Amber is the Princess of Crystal City. 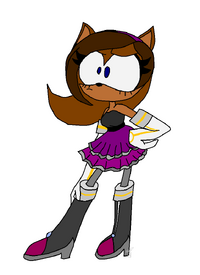 The idea for Amber first came when trying to come up with ideas for Silver's past and relatives. Along with King Platinum and Queen Opal (originally named Queen Venus), Amber was also created. At first, she was going to be named Bronze, and was Silver's little sister who loved him with all her heart, but things have changed. What exactly has changed is yet to be revealed. All we know is that she is now an antagonist and she hates Silver.

Journey from the Future

Amber first appears in Sonic the Hedgehog and his Awesome Friends in the ending of episode "The Time has Come". She appears as a black silhouette with dark blue eyes, questioning the other dark shadow of his motives. Eventually, she's convinced by the other dark figure of something unspecified, and grinning maliciously, brings herself into the light.

She appears again in Season 6, episode "Ambitious Hedgehog", this time in Sonic's timeline, searching for Silver. When she encounters him, without even talking to him, she begins to attack. Despite Silver's confusion, Amber mercilessly rages on until Amy Rose interferes. The pink hedgehog smacks her with her Piko Piko Hammer, sending the crazy princess away. Amber flies all the way into the bottom of a trench, where she sits there, angry and defeated. Her younger self appears in a flashback in episode "Fancy Flying". In that episode, the reasons for her actions are revealed.

Turns out, Silver is actually a prince and Amber is his twin sister. Out of fear, Silver stole a Kronos Emerald and escaped to Sonic's time. What Silver didn't know then, was that Amber took a Kronos Emerald too and is bent on getting rid of him so she can become queen.

Appearances in other media

Amber also makes a appearance in the alternate universe, The Möbius Gems (page yet to be created) as a Homeworld Gem named Amber. After the Möbius Gem War, she came to Möbius via Warp Pad, revealing that even after the war, the Homeworld Gems were still plotting to take over.

Mario and Sonic at the Olympic Games: the Series

She appears in Season 4 and in Season 5 as a competitor rivaling Pauline. The only reason she decided to compete, was so that she could keep an eye on Silver.

In Mario & Sonic at the London 2012 Olympic Games, Amber appears as a rival in London Party. Out of wanting to prove herself, she'll challenge the player to a game of Dream Trampoline. If you win, later Amber may demand a rematch, but this time you'll be challenging her in Beach Volleyball. If you beat her in any of the two, you'll earn a large sticker of her that takes up four spaces in the sticker book.

In Mario & Sonic at the Sochi 2014 Olympic Games, she'll appear as a playable character, rivaling Birdo. Amber, in this game, is an Skill-Type character.

Amber is set to appear again in Mario and Sonic at the Rio 2016 Olympic Games.

This princess has dark sepia bangs that she usually styles to the left. Amber's fur color is amber brown and her skin is tan. She has a single lock of hair in the back, which often curls to the left. Her eyes are dark blue and her two upper eyelashes are short and thick while her three lower ones are small and thin. Amber also prefers to wear dark purple eyeshadow and light pink lipstick. She wears a black tank top with a magenta and violet ruffled skirt with silver linings. Along with that, she wears gray leggings and boots similar to Silver's. The shoes are black with a white line that ends at the cuffs and a magenta petal-like part at the "toe" of the shoe. Her powers are colored dark yellow and they show on her gloves and boots.

In the Mario and Sonic at the Sochi 2014 Olympic Games, she wears her hair the same. Her headband is black.

In The Möbius Gems, her appearance stays mostly the same, except for the gem placed on her lower spine. Her clothing consists of a black suit with an orange diamond imprinted on it and brick orange boots.

This psychokinetic hedgehog princess comes from the future for unknown reasons. Though she may look beautiful, many can't say the same thing about her personality. She wants more than anything to be the best in anything and everything, and she won't let anyone get in her way.

Amber is a very social person, usually going out of her way to introduce herself to people immediately, even if she doesn't even know them. She will always compliment herself while describing herself to people, making her seem very full-of-herself. Amber is very prone to flipping her hair back in a dramatic manner, as if to show off. As vain as she is, she still is very loyal to the rest of her family and her subjects.

Amber also has an envious side to her and she disguises it with disgust and self-pride. The hedgehog has a tendency to get very jealous very fast and has little empathy for people. Ironically, she expects people's sympathy and respect, though she gives none to others. She can also be very hypocritical.

Her ambition is what stands out the most in her personality. Amber doesn't understand the meaning of giving up and is willing to do whatever it takes to get what she wants—no matter the cost.

One of Amber's weaknesses is her bracelets: because of a condition, she must keep them on at all times, or else her powers will flow out of her body and eventually kill her. In terms of powers, Amber cannot work well in the cold because it effects her sap-like powers.

Another one is her gullibility. If one were to tell her that she could rule the world and have unlimited power, she would defiantly believe it. At stated before, Amber's willing to do anything to get what she wants. She's very whiny and stubborn when she doesn't get what she wants to the point of annoyance, and the sheer amount of arrogance she has gets her into many, many problems.

"Duh! I'm the best! And no one can prove me otherwise!"— Amber

"First place is mine!"— Amber in the Olympic Games before a competition.

"Hey there! I've been watching you for a bit and couldn't help but notice that you're in this London Party thing. I tried to get in, but they wouldn't let me. Guess I was just way too talented for them. But, to prove to them, let's see who's better at this Event—don't be surprised if I win." — Amber challenging the player to a game of Dream Trampoline.

"Pfft, surprised? You shouldn't be; it was beyond obvious that someone as talented as me would win. Next time, don't even bother with me unless it's worth my time. — Amber, if you lose against her in Dream Trampoline.

"But—How—What—How is that possible?! You can't beat me! I'm a princess for crying out loud! You obviously cheated! How dare you! You'll pay for this!" — Amber, if you beat her in Dream Trampoline.

"Guess what, loser? I'm back and I'm here to prove your no match for me! Let's settle this over a game of Beach Volleyball. What's the matter? Scared?" — Amber, when demanding a rematch in London Party.

"...I won? Well, of course I won! I'm the best! You shouldn't have messed with me in the first place. I'll be going now, but I got my eye on you." — Amber, if you lose the match in Beach Volleyball.

"WHAT?! How are you doing this?! It's not fair! I should've been the winner! I'm telling daddy on you!" — Amber, if you win against her in Beach Volleyball.

How Amber originally looked before her design was changed. This was made on Furry Doll Maker.

Just Amber in a dress. Made on Furry Doll Maker.

Concept Art.
Add a photo to this gallery

Art done by Crisskitty on deviantart! Go see her art!
Add a photo to this gallery

Retrieved from "https://sonicfanon.fandom.com/wiki/Amber_the_Hedgehog?oldid=1799658"
Community content is available under CC-BY-SA unless otherwise noted.