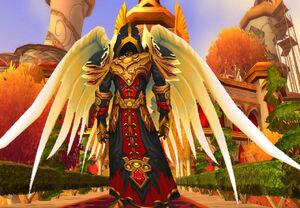 Amatiel Sacraforge, also known by Alah'Dorei, the Light-Born, was once a Blood Elf Paladin who, after his death, was resurrected by the Naaru as an Archangel in order to traverse the universe to seek out other willing warriors to aid in their crusade against the Legion.

Amatiel wears a long black, gold and red plated robe, colours that reflect upon the general fashion of his elven heritage. He wears a set of large, segmented spaulders that are black and red with gold lining and decorations on the plates. His armor is socketed with various empowered red and yellow gems, each granting him a different type of power. He wears a black and gold hood that completely obscures his face, an ideal that is reflected upon all Archangels.

Amatiel's body is rarely ever shown, and it usually because his outfit becomes battleworn and thus receives various tears and splits. In some cases the Archangel does remove a glove in order to allow his powers to flow more freely; his armor helps control his powers but also restricts its output. Amatiel usually removes his gloves in order to increase his healing powers.

His most defining feature is his large angel wings, which allows him permanent flight and can also be used as a light-based weapon when fighting against demons and undead.

Amatiel is naturally a Good character, as evident by his training as a Paladin during his former life. As an agent of the Naaru he is inclined to spread the glory of good and the strength of justice throughout whatever worlds he can encounter in order to build up the army of the light. As such, he is strongly opposed to any evil aligned characters and generally tolerates those who are neutral, keeping caution to make sure they do not turn against him.

Although a good-aligned character, Amatiel has little regard for the mortal races and their problems, citing that he does not intervene in the "petty quarrels" of others. Nonetheless, if a part of these conflicts affects Amatiel in an offensive manner, be it against his ideals or that of the Naaru, he will enter the fray should he feel it a necessity. As such, most regard Amatiel as a capricious individual but with his heart in the right place, opting to look at the bigger picture.

Despite a huge personality change from his former self, the only shred of past allegiance is towards his fellow Blood Elf kin. Although they are not necessarily good aligned in some cases, and even instigate conflict both inside and outside their own faction, Amatiel feels obligated to help his race in order to lead them towards a brighter future.

For a while, the Elves of Silvermoon lived peacefully until the Second War. Amatiel lent his hand to Alliance Forces and, alongside the Order of the Silver Hand, trained in the ways of the Light and became of the first, and few, High Elf Paladins. The Alliance successfully fought off the Horde forces, and the Elves who aided Lordaeron were returned to Silvermoon.

Not all was pristine, though. After Arthas, a powerful Death Knight, invaded Silvermoon City to use the Sunwell, Amatiel was gravely wounded and his father was killed in the onslaught. Led by Kael'Thas Sunstrider, Amatiel and a handful of survivors, now renamed Blood Elves, the Sin'dorei, ventured to Outland to find a new source of magic to tame the Elves' addiction. Amatiel, though not afflicted by such addiction since his turn to the Light, ventured with the Prince to lend his aid.

When Kael'Thas made his pact with Illidan the Betrayer, Amatiel secretly left the group when he discovered they were channeling demonic Fel energies to quench their addiction. Branded a traitor, Amatiel was chased down by his fellow kin as he ventured Outland to find a way back to Azeroth. Beaten and bloody by ambushes of his own kin, demons, and strange creatures, he was recovered by a group of Draenei refugees and taken to Shattrath City.

A'dal, a powerful Naaru, revitalised the Blood Elf and showed him the visions of the future to come. Amatiel, disgusted by what he had seen become of his people, was returned to Silvermoon by the Naaru in order to change the fate of his people, or at least to aid it. Finding that his people had learned to emulate Paladin magic by siphoning the energies of a captured Naaru, M'uru, Amatiel joined their ranks in order to show them the powers of the Holy Light without the expense of another being. His preaching fell on deaf ears, though.

A time later, Amatiel returned to Outland in order to establish a raid on the Legion's main stronghold in Shadowmoon Valley. Determined to end the Legion, he used a demon entry portal to venture to their home world, Xoroth. Amatiel, however, was overwhelmed and quickly killed. However, the Naaru, not relenting in keeping this champion alive, returned his body to Shattrath and resurrected him as an Archangel.

Amatiel, now greatly empowered, was tasked by A'dal to venture through the universe, using whatever means he could to build an army to face the Legion. Amatiel, now, has ventured into this universe in order to seek worthy warriors to face the demonic forces.

As a former paladin and Archangel, Amatiel has the utmost control over the Holy Light, although his powers have dimished a little due to being a great distance from the Naaru on a cosmological scale. Despite this setback that does not mean he isn't incredibly powerful in his own right.

Amatiel can also achieve a form of flight by using the large wings on his back. The wings are made entirely of Holy Light and are considered to be a part of his natural form, so they cannot be removed or dispelled by any means short of their complete destruction. His wings allow him to achieve flight speeds of 205.4 miles per hour, almost matching the speed of the fastest Mobian. Due to the nature of his wings, they can be used as an improvised weapon against Demons and Undead creatures, causing a severe burning pain as though touched by intense flames. Lesser undead and demonic entities may find their lacerations are lined in charred ash, unable to be healed naturally.

Amatiel does not deal with much in the form of items, other than his blessed Archangel Regalia. His armor does not give him any added abilities or powers, but instead restricts the flow of energy and keeps it from dispersing violently. In a sense, it helps to keep Amatiel's physical form together as his energies still remain volatile until he can naturally adapt to it.

Amatiel has always kept one equipment close by, that being the High Blade "Quel'Serar". The sword was forged by the five dragonflights several thousands years ago by the heat of their breath weapons and tempered in their blood. The "prismatic" blade is said to be a hundred times denser than diamond, being able to cut through all known materials on Azeroth. The blade serves as a perfect conduit for channeling holy energy, allowing for its attacks to be greatly intensified, especially when used against Undead and Demons, almost rivalling the Ashbringer in that respect.

Retrieved from "https://sonicfanon.fandom.com/wiki/Amatiel_Sacraforge?oldid=1798229"
Community content is available under CC-BY-SA unless otherwise noted.