Amanzi the Mandarin Dragonet is an Alchemist that serves the Water Clan of Neso. 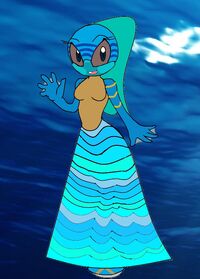 Amanzi is a Mandarin Dragonet with a pear-shaped body type. She stands at a few inches shorter than the average Mobian. She has dark blue eyes with brown sclera, a long, fanned-out tail, two dorsal fins, a slightly prominent forehead with blue stripes, and thin blue webbing between her fingers. Her shoulder-length hair is Amazonite.

She wears a sleeveless aztec gold shirt and a blue skirt that looks like layered seashells. She will usually wear a protective lab coat over it.

Sweet and bubbly, Amanzi is the type of person who will usually avoid conflict of any kind, whether physical or verbal. She will usually agree with anything her superiors say, whether or not it is true.

However, Amanzi holds a dark secret: she doesn't worship any of the elemental gods, including the one for her clan. However, she will pretend to do so in order to please her superiors. </span>

Amanzi has weak hydrokinesis, usually shooting water out of her palms. She is also able to swim at a speed of around 100 mph, depending on the water terrain, and run at around 90 mph.

Despite being a pacifist, Amanzi is able to hold her own in a fight, able to lift at least 100 lbs and slap away enemies with her tail.

More of a pacifist than anything, Amanzi will usually not resort to physical combat. If a threat arises, she will use a potion she has created to beat her foe back. If a potion doesn't work, she will use her daggers, although not very much.

She is also afraid of the dark.

Retrieved from "https://sonicfanon.fandom.com/wiki/Amanzi_the_Mandarin_Dragonet?oldid=1847666"
Community content is available under CC-BY-SA unless otherwise noted.