My duty is to serve the king. 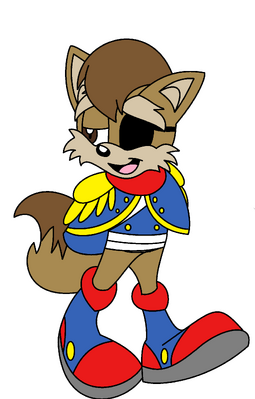 Amadeus Prower is a character that appears in the Marshalia13 Universe. He is a mobian fox, King Acorn's current advisor, wife to Rosemary and father to Tails.

Amadeus Prower was the older son of William and Mary Jane Prower. As an adolescence, his parents were killed during the Great War, leaving him to take care for him and his brother, Merlin Prower. In his 20s, while he was a young military officer rising through the ranks, Amadeus meets Rosemary, a law student with an administrative position at Castle Acorn. They shared an ambition to debate and married quickly.

Amadeus assisted Rosie Woodchuck and Charles the Hedgehog in evacuating Mobotropolis from Eggman's coup. Two years later, Amadeus and Rosemary had Miles. They were eventually captured by Dr. Eggman's forces, leaving Miles orphaned in Knothole. They managed to escape before they went into hiding, knowing that returning to Knothole would put everyone they knew in danger.

After 8 years, Amadeus and Rosemary returned to Mobotropolis and reunited with the son. From there, they began to rebuild the life they had missed out on. While Rosemary became a journalist and a writer for the local newspaper, Amadeus became Nigel's royal advisor.

Amadeus possesses a fiery spirit, and is a dedicated patriot and hard-willed soldier. He considers himself "the sword of the people", eager to make sure that their rights are defended. He is also forward thinking, and determined to fix what doesn't work in his given system. While passionate, he is also volatile, and has let his temper get the best of him at times, though his heart is in the right place. He is also a loving and proud, if somewhat inexperienced, father, and a devoted husband. Somewhat aggressive, he tends to try achieving his goals through force rather than trying negotiation, at least until he is convinced that peaceful means are better.

Amadeus is a tactical genius and a skilled swordsman, though his strength and speed are fairly ordinary for a Mobian of his size.

Retrieved from "https://sonicfanon.fandom.com/wiki/Amadeus_Prower/Marshalia13%27s_Universe?oldid=1798334"
Community content is available under CC-BY-SA unless otherwise noted.