Allen is a 15 year old, purple devilcat that is part of Team Secret with his 2 best friends, Garry and Nicko. He has a brother named Alex. Most of the time he's taveling around The Silent Planet with Garry, Midnight and Nicko and Bob(sometimes).

Very Cheeky. Very Devillike. But he can be kind sometimes(when he's in a good mood). He can't stand idiotic behaviour from people(Dexter, Bruce, Toxic and Nathan as examples).

He's a very good fighter(trains with Threetails a lot) and has a lot of tricks up his sleeve. Because of his devil spirit he can turn into a pure devil during a dangerous situation or when he's really angry. 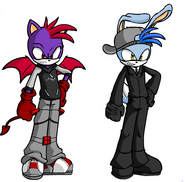 Allen and Garry
Add a photo to this gallery
Retrieved from "https://sonicfanon.fandom.com/wiki/Allen_the_Devilcat?oldid=1799817"
Community content is available under CC-BY-SA unless otherwise noted.