I just wish the summer could come back. I miss the beach, the heat, and especially no school~! 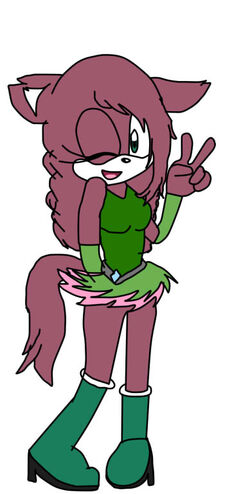 Alison the Husky, born as Andrew, is a character created by Darkest Shadow. She is a very gifted flute and guitar player attending Riverside University in Laertes.

Alison was born as Andrew Montgomery in the month of August. As a child, she didn't grow up well. The gap between her and her twin sisters was a twelve year gap, so her parents were too busy with caring for the other two as they travel through high school and left Andrew to live with his grandmother.

She grew up as a gay boy, which everyone made fun of her for. She sometimes cross-dressed by wearing high heels, but not over the top like skirts and dresses. Her grandmother told her to embrace her inner girly girl and that she can be whatever she wants, no matter how much her parents discourage it.

She lived with her grandmother until she passed away when she was twelve. At her funeral, she was hysterical crying and didn't have a family to care for. Over the years, her parents seemed to dislike her very, very much due to the fact that she liked boys, wore pink and was overall "messed up". So then, she moved to a different state with her aunt and uncle, who she really liked.

When she turned fifteen years old, her aunt and uncle agreed to make her undergo surgery to transition. She could not have been happier, but she remembered getting told by her father that he would kill her if she ever became a woman. So they cleverly had Andrew fake his death and held a funeral for Andrew saying that he got in a car accident. With that, she went through enough surgery to fully transition from Andrew into Alison.

The aunt and uncle were very happy with the results. Alison was a beautiful girl, and this was her lifelong dream. However, she still liked the nickname Andy. She was free, and was able to do whatever she wanted. She moved cities and got a completely new fresh start as Alison. She was very popular throughout her school years.

She continued her talent in playing flute and took up lessons in playing the guitar. She practiced for two years and said she wanted to major in music for college. Two years later, she applied for a college in Laertes. When she got in, she was ecstatic.

However, days after she got in, she found out that both of her parents died in a lightning storm back home. She was invited to go to the open funeral, but she figured not only is their child "dead", but she did not love them at all. She was actually very happy to hear that both of them died.

Alison is usually bright and bubbly. Outspoken and a socialite, she likes to make friends and go out. It's very easy for her to make friends this way. Her kind heart and charisma makes her become buddies with almost anyone she meets.

She is also a feminist at heart. Even when she was a boy, she never liked people mocking or making fun of females. In fact, it is one of the reasons she transitioned in the first place. She feels as if women should be more respected and seen as more than what men think they are.

Despite her bubbly nature, she is very secretive of the fact that she was born a boy. She only told one person this and doesn't like to remember those times.

Standing at 3'5 and weighing in the low 80's, Alison is a dark violet-red husky short fluffy ears, and a medium-length fluffy tail. Her hair is long and loosely curled going to about her mid back, with a large shaggy bang on the left side of her face. Her eyes are disconnected with turquoise irises and two eyelashes on each eye.

For clothing, she wears a green top with a v-neck cut on the neck. She wears it tucked under a grey belt with a crystal in the middle. For bottoms, she wears a frilly light green mini skirt with a pink border. For footwear, she wears knee-high teal boots with white cuffs and dark grey soles. For an additional accessory, she wears two tight green semi-transparent arm warmers.

Alison is very talented at playing the flute. It is the first instrument she picked up back when she was living in North Portland. Over the years, she has proved to be the best flute player in her school, and ended up getting offered to have a long solo in the state orchestra. She can play a variety of songs, even improvise notes and riffs.

While she was in high school, she learned how to play guitar. She took lessons, and was at first going to quit it. However, her uncle told her to give it a chance and that it is a fun instrument to play, so she decided to continue, and eventually master playing it. She can strum all of the chords now.

Retrieved from "https://sonicfanon.fandom.com/wiki/Alison_the_Husky?oldid=1749006"
Community content is available under CC-BY-SA unless otherwise noted.