This is an article about Alicia Acorn/Mobius Redrawn, a character created by Konnichiku on 03/10/2015. 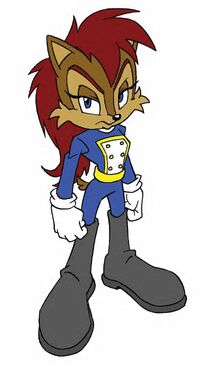 Alicia Acorn is a Moebian who is the princess of Nothole. She is the best friend of Sally Acorn.

Alicia has red hair and brown fur. She wears a blue jumpsuit with a white chestplate on it. She wears grey boots and white gloves. She is sometimes seen carrying a gun. She wears a yellow collar and yellow belt.

Alicia is an outgoing, cheerful chipmunk who never stands as a threat to anyone. Her ditzy personality leads her to get kidnapped by Knuckles or Shadow often, but is usually helping Sonic, Amy, Sally, Mina, or Wave out in their journeys. She is a fun-loving teenage girl who works as an artist in her free time.

Alicia Acorn was born on the planet Moebius. She moved to Nothole at 4 years old, and became the princess there. When she was 17, she got caught in the Null Space which was sweeping across the entire world thanks to the Time Eater. This is where she met Sally Acorn. They quickly became friends.

She met Amy, Sally, and Mina and was invited to their first world tour. On the bus, Alicia set next to Rosy the Rascal, who made friends with her.

She is currently helping Wave the Swallow on her quest to end Robotnik's rule over Mobotropolis.

Alicia can run at high speed (but not as fast as Sonic or Rosy the Rascal) and grapple walls.

Alicia can swim well. She also runs at a speed of 150 mph.

Alicia is skilled at running, swimming, jumping, and grappling.

Alicia is weak to ice.

Retrieved from "https://sonicfanon.fandom.com/wiki/Alicia_Acorn/Mobius_Redrawn?oldid=1807268"
Community content is available under CC-BY-SA unless otherwise noted.