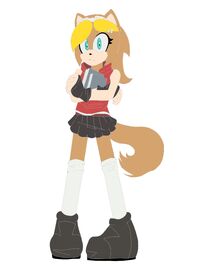 "I don't want to rule or conquer anyone. I want to help everyone if I can. So why can't I?"-Alice Paramore.

Alice Paramore, also known as Alice the Hedgefox, is a female Hedgefox and the future daughter of Alfred the Ancient and Laina Paramore, taking the last name of her mother. She is the brother of Edward Paramore and loves him and her family completely, even though Edward gets on her nerves a lot of the time.

She is also related to the children of Hamaveck the Hateful, Malice and Dexter Marapore. She gets along with Dexter a lot more than Malice who treats Alice with a great deal of distain and dislike. Regardless, Alice does what she can to help all members of her family when she can.

When first introduced, Alice seemed shy and self contained. She didn't have many friends when she first went to high school and prefered to spend time alone reading books. She was very resentful of her twin brother who always seemed to get in the way of her studying and tried his best to deliberately annoy her. As a result, the two twins can sometimes feel very seperate from one another yet they still share a strong bond between each other, knowing when the other is hurt and wanting to help.

Alice is later shown to be an extremely selfless individual. She sympathises with people who are on the edge of society and seperate from other people, relating to them due to her seperation from her classmates. She feels a near impulsive need to help others when she can and can even be prepared to allow herself to come to harm in order to help them. She doesn't see running away and leaving someone to fend for themselves as an option. She always wants to help in anyway that she can, unlike her brother who feels no compulsion or desire to help anyone.

Alice can also seem incredibly isolated and cold sometimes. Having come through her first school with barely any friends to show for it, Alice has developed a definate sense of needing to be alone. She doesn't like people who just follow the crowd and much prefers to be seperate and alone. Despite this, Alice still longs for someone who understands where she's coming from and knows how she feels.

When Alice temporarily turned evil due to Hamaveck taking advantage of her in pain during puberty, she changed completely. She acted with malice towards everyone around her and allowed her rage to spill out of her. Her dislike for the people that had isolated her turned into hatred and this manifested as a hatred for all things around her. She would gladly attack anyone in this state and couldn't tell former friend from foe and didn't really care.

Pure Chaos: Alice's powers of Pure Chaos didn't reveal themselves until she hit puberty, when she was going through the most chaotic time of her life. Feeling lost and alone, Alice's powers manifested and exploded out of her and moments of intense rage or pain.

Her branch of Chaos is the most potent. Alice possesses all the abilities of the actual creature Chaos and none of its weaknesses. She can use Chaos to an extremely high degree and can also control the Chaos Abilities of others. This came about from her connection to both her father's Chaos abilities and her mothers.

Secondary Theme: Never Let Me Go - Florence and the Machine

Retrieved from "https://sonicfanon.fandom.com/wiki/Alice_Paramore?oldid=1780347"
Community content is available under CC-BY-SA unless otherwise noted.