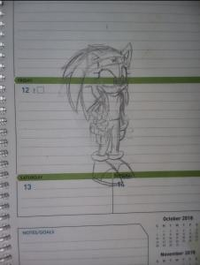 Lexy is a light blue-furred hedgehog who stands at 2'8 and weighs 72 lbs. She has several quills behind her head that droop down immensely, and she is a bit skinny due to not letting herself eat as much as she should. She wears a black headband with a snowflake insignia in the middle across her forehead along with a short-sleeve purple shirt with pockets to hold kunai and shuriken. She also has light-blue leggings, and a belt with multiple weapon-carrying pouches.

Lexy is a rather shy girl, not really liking confronting issues that bother her and preferring to just let things pass by. Lexy is also a very big pushover, and convincing her to do something is very easy. However, this is mainly with people she doesn't know - if it's someone she's acquainted with, she has much more confidence in herself and can make her own decisions without just relying on going with the most peaceful and simple option.

While she doesn't really try in this part, Lexy is a skilled leader - she just doesn't want to be. Because of this, she can seem a bit selfish, letting someone else take charge even though she thinks there are very big flaws with them in that position. However, if someone elects her in a position and/or she's forced into that situation, she won't back down.

Lexy tries very hard to meet up to others' expectations of her... and even beyond them. However, Lexy knows that she's not perfect, and this leads into a bit of self-hatred, because she feels like she can't satisfy others with the littlest things. This internal part of her is mostly a result of her mother's death and Crys' abuse, forming together to make Lexy very self-doubting and disliking.

Lexy is easily impressed by even the smallest things, which makes her gullible and easy to convince if you know what to say and when to say it. With the right combination of persistence and "show don't tell," you can completely fool Lexy for whatever you're trying to get across.

There are certain moments when people doubt themselves where Lexy can get philosophical and deliver a pretty good speech relating to the issues the recipient is having. This fits into Lexy's nature of treating others better than herself, because even when she might tell someone that they're good enough per se, she will absolutely not practice what she preaches.

Lexy Marinette Wynter was born to Cobalt Kifyuy and Charm Kifuyu, a relatively happy family. She had an older brother named Crys Kifuyu, who was fifteen years older than her. Her father, Cobalt, was a long-time instructor at the Ifrit Rising Academy, which trained powerful students so that they could use their powers to help the world. One day, Lexy presented some of these powers herself - she froze a mug of milk in a solid cube of ice. Cobalt, who also had ice powers, was excited, and he wanted to train Lexy like he would any of his students, but better.

Only problem was that Charm didn't want Lexy to be trained. Lexy was a rather calm and quiet child, and Charm imagined that if Cobalt trained Lexy, it would completely change her nature... and Charm liked her calm nature. However, Cobalt brought up an important point - if someone displayed powers, the best choice was to train them for one central reason - if you didn't, and they grew up not having control, they could possibly become a threat. However, this reason wasn't good enough for Charm, and she and Cobalt argued. A lot. Even though Lexy was still super young, she and Crys would often go into their rooms in order to block out the yelling, and deny the possibility of a divorce. However, all of the Kifuyu knew that it was inevitable.

Predictably, there was a divorce, and Charm got custody. As Cobalt went on to keep teaching at Ifrit, Charm took care of her kids by herself and changed the families' last names to Clarisse, working two jobs in order to make sure they both could live the rest of their childhood normally, and never reminding them about Lexy's powers, or the fact Cobalt was still living around them. As time went on, Lexy grew up, and she began to forget about her father completely.

When Lexy was ten, a very important event happened. It was a normal day - her mother and her were all playing together, enjoying life. However, out of nowhere, ice shards manifested out of thin air, surrounding Lexy. Lexy was scared and unsure of what to do, and Charm tried to get into the ice shards in order to save her daughter. However, she was stabbed repeatedly by the shards, and by the end of it, Charm was dead. Lexy was devastated as she worriedly called 911.

However, it was far too late, and the damage was done. Ashamed of herself, Lexy was sent to live with Crys, who had moved into his own house. When Crys got the news, he was angry - very angry. And, well, Lexy was the cause of his mom, his loving mom, dying, so he used her as an outlet of his rage. For three years, Lexy lived with Crys, and she was physically abused by him, but never said anything about it because she took it as the punishment she deserved. This pain that was inflicted onto her largely hurt her self-confidence, and she stopped eating so much in order to punish herself for the death of her mother.

This treatment also carried into the public. Though Crys was much more discreet about it, only occasionally whacking Lexy, or chewing her out with incredibly mean language. It was on one of these days, when Lexy was playing at a playground by herself and Crys came to pick her up, that Crys was annoyed that she hadn't come home when it was time and began yelling at her. An older girl who was babysitting her own younger siblings, a yellow, brown-spotted ocelot with short blonde hair who came to the ten-year-old Lexy's defense, saying that he should stop being so rude to her for a simple mistake. Crys couldn't believe that anyone dared to speak back to him when he was talking to Lexy, and not feeling like arguing, Crys left the playground, telling Lexy to come home when she was done.

The ocelot told Lexy that Crys was a jerk (which Lexy didn't agree with, but she didn't argue with her) and asked her what her name was. Lexy didn't like conversation so much, but she figured that since Tessa had saved her from possibly being hit, she said her name was Lexy Clarisse. The ocelot introduced herself as well, explaining that her name was Tessa Marvel, and asked if Lexy wanted to hang out with her and some of her younger siblings. It was on this day that Lexy made her real first friend.

After three long years of Crys' treatment of her, along with Tessa's constant reminder of how she should've gotten out of the house, Lexy had enough, but she was too scared to do anything. So, she called her now-close friend, Tessa, and told her about her predicament.

Tessa was torn when Lexy finished the entire story of why Crys treated her the way he did, and the hedgehog was in tears. Tessa said that Lexy should run to her house, and they'd talk about it more, and Lexy agreed. One day, when Crys had gone to work, Lexy ran, and ran, and ran to Tessa's house, not allowing anything to hold her back from escaping. Though it was a long journey, Lexy eventually made it, though she was dirty and exhausted.

Tessa, who had told her family about Lexy's situation, was prepared to call the cops on Crys, but Lexy told her not to, for in her eyes, she was the cause of it all, and he "did what anyone would've done." While the Marvel family was very confused, they decided to reluctantly go along with it and let Lexy live with them. Lexy was surprised a family that was already so large (nine kids, two parents) would let her reside with them, but they welcomed her with open arms.

For the next two years, Tessa and some of her siblings would train Lexy, teaching her about her powers, which weapons she was best with, and chakra. After a relatively happy time in her life, Lexy was feeling a bit better, while still slightly depressed about her past. That's when she learned about the Ifrit Rising Academy, and she and Tessa enrolled, with Lexy going with Team Chakra and Tessa enrolling into Team Chaos.

Lexy was born with cryokinesis and hydrokinesis, and after some practice with Tessa's family, her Kaioken instructors, and Cobalt, she now has good control over it. Lexy doesn't use it to face opponents head-on - instead, she uses her tactical ability to confuse and overwhelm the opponent. She does this by using her chakra, which is like her spiritual source of energy. However, she has a limited supply of chakra, and it can be hard to focus, so she uses hand motions in order to concentrate it in several forms. Due to this, she has created several techniques (called jutsu) that involve manipulating her powers and chakra to help her in combat, including:

Lexy constantly has an area of coldness around her, and though she can tone it down slightly, she doesn't have complete control of it. Because of this, she rarely feels heat, and things like fire are her weakness. However, she also has a counter against fire with her hydrokinesis, so it's a triple-edged sword, really.

Lexy also can breathe underwater, so if you're battling under the water, she has an edge, as she can move freely without having to consider things like her breath and when she needs to go up for air. However, her powers are hard to use in water, so, like before, this has its own slight backfire.

Lexy is a good tactician, being able to scan the field and make decisions based on her current situation. Though she wasn't the best at this in the beginning, with her father's teachings, she was able to improve. She utilizes this when uses her jutsu, especially Puddle Pain. However, when scared, Lexy is not good at this anymore - suddenly, she freezes up and just tries to get out of the situation.

Lexy is also skilled in using shuriken and kunai, using them to pick off enemies. She occasionally uses explosive shuriken/kunai, which can be good for getting the jump on the opponent and set up for further attacks.

Alexia in a Crossverse Christmas pic by Skid, thanks!
Add a photo to this gallery

Retrieved from "https://sonicfanon.fandom.com/wiki/Alexia_the_Hedgehog/Sonic_Reborn_Version?oldid=1885954"
Community content is available under CC-BY-SA unless otherwise noted.