Start a Wiki
This is an article about Curtis Tsukada, a character created by Alphonse Uprising on 03/12/2010. 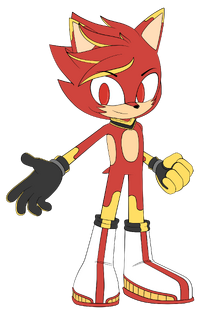 This page is currently undergoing a total reboot.

Akio Tsukada is a Japanese extreme athlete from the island of Okinawa, playing in surfing, snowboarding, and skateboarding. Born in 1999, the Hokkaido wolf holds the power of pyrokinesis.

Akio is a fun-loving party animal who likes skateboarding, surfboarding, and snowboarding. He also loves to do "radical" things which are often dangerous and dumb ideas (You could pretty much call him an amateur daredevil if you want to). Some of these "radical" missions Akio would perform would include going to an illegal water slide, riding a bike inside a mall, and eating as much fried chicken as possible. Despite being socially awkward at times, he's very fun to hang out with and a loyal friend.

Akio holds the powers of pyrokinesis and enhanced muscular strength. With these powers, Akio can play with the natural force of fire and endure extreme temperatures without stress or injury. Akio can even absorb fire and use it to augment his abilities.

Absorb: Akio can absorb fire and heat and use it to augment his own abilities.

Retrieved from "https://sonicfanon.fandom.com/wiki/Akio_The_Hokkaido_Wolf?oldid=1798332"
Community content is available under CC-BY-SA unless otherwise noted.