Start a Wiki
This is an article about Ajuloputus the HedgeLynx, a character created by Megaphantaze on 05/30/2014.

The author of Ajuloputus the HedgeLynx considers this page to be unfinished. As such, some sections may change. 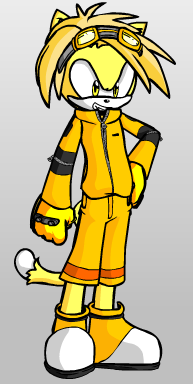 Ajuloputus is the ninth Caliber master and the master of brainwashing.

Ajuloputus is a golden colored hedgelynx, who has golden hair. he also has a golden attire, which includes golden jacket, golden gloves and golden pants. He also has racing glasses and Yellow shoes. Golden color represents brainwashing and taking a control of opponents in the history of karti masters.

Ajuloputus is a bossy person, but still good leader. He finds friends with his power to brainwash people. His sister doesn't like Ajuloputus' target to use his ability and she loves to get real friends. Ajuloputus doesn't respect her sister much, but still loves her.

Ajuloputus' main power is to brainwash his opponents. the effect will make his victims to obey him and attack against their not-brainwashed members. Ajuloputus can stop the effect anytime he wants, so he can keep the victim brainwashed as long as he wants. However, the effect can be stopped by hitting the victim with something. The best weak spot is to hit head. Thisway, the effect of the brainwash will be eliminated. When using the emerald, the emerald must be taken from the user's hand. The effect may not stop and if so, the brainwashed victim will obey the one, who has the emerald.

Ajuloputus' weakness is a metal. He is unable to brainwash robots and anyone, who has something made of metal in the head. He will get shock from the attempt to brainwash these types of persons. And like many karti Masters, he weaks sonic waves.

Ajuloputus is a DJ in his own club. The club name is "Fete Modus". It's said, that Groove Man is his best friend and DJ partner of the club, before and after Kabo took control of him and used him to evil purposes. He also has adopted sister called Sheyla the Hedgelynx. She is a good side of the Ajuloputus, who likes to get a friends without brainwashing them. Ajuloputus is also enjoying a time with Dixie, who is Fete Modus' most active guests.

Ajuloputus is Estonia and means "brainwash"

Retrieved from "https://sonicfanon.fandom.com/wiki/Ajuloputus_the_HedgeLynx?oldid=1867775"
Community content is available under CC-BY-SA unless otherwise noted.