Agnes the Wolfdog is a 16-year-old, anthropomorphic, female wolfdog. 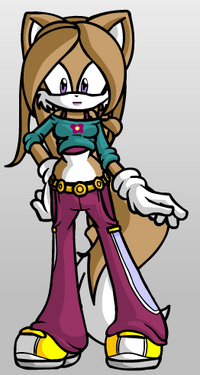 Born in a picturesque, remote village somewhere in Mobius, Agnes was the daughter of a wolf mother and dog father.

She has violet eyes and white and light brown fur. Her hair has a similar color of the latter and is sleek and waist-length. She wears an off-shoulder, teal-colored shirt over a purple tank top, purple pants secured by a gold belt, a pair of white basic gloves, and also a pair of yellow and white sneakers. For a unique crossbreed, Agnes has a physically fit body.

Agnes is an independent, good-hearted, strong-willed, comely, confident, laid-back young gal. She usually takes pride in her wolf-dog heritage and shows everyone she is a unique breed. She is very resilient when it comes to her strength and will not let anyone underestimate her.

Agnes is highly skilled in basic combat and possesses super strength and agility when she can attack opponents with her fists and/or retractable claws. Since she has super speed, she is able to run as fast as Sonic or Shadow. An expert climber, she can climb on mountains and ledges with the use of her claws. She can also swim at great lengths.

"Time for some action!"

"AWOOOO! I'm hot like fire!" -After getting an S rank.

"The best just got better!" -After getting an A rank.

"Well, it could've been worse." -After getting a C rank.

"Are you kidding me?!" -After getting a D rank.

Agnes and her teammates

Agnes in Charrie Maker
Add a photo to this gallery
Retrieved from "https://sonicfanon.fandom.com/wiki/Agnes_the_Wolfdog?oldid=1774096"
Community content is available under CC-BY-SA unless otherwise noted.