"As you and Sonic shall know, Miho ceased to exist! Now it's your turn!"
—Miho Satsuma declaring herself only as Agent Shinu before fighting Sonic and Rosie again.

Agent Shinu is a japanese mobian chipmunk those goal is to either bring Sonic to Eggman or to kill any of Sonic's allies. Her first appearance was in the first chapter of Terror of Crimson.

She was born in a family of Yakuza in Osaka, Japan. She left the Yakuza mob when she was 15 years old. A few years that she met Fairy the fox and her brother Fabian. She didn't reveal her status as a former yakuza and even seemed to show comfort to them after heard about their parents demise. She was offered to join G.U.N by Fairy but she delinced, deciding to just go her own way.

Miho started to work for another mob in Japan to do their deeds to assasinate rivals of theirs. But during one of those missions, she was informed she would murder her own mother Leiko Satsuma. She couldn't bring herself to kill her own mother and instead rejoined her mother's Yakuza mob. Prior to her status as Agent Shinu, Miho began wearing a purple ninja suit during her duties. When Miho was given the order to murder the primeminister of Japan, she was stopped by the force of G.U.N and among them were Fairy, who became completely shocked when she removed Miho's mask. Miho let herself get turned in knowing she failed her mother and revealing her identity to Fairy.

Miho was sent to prison sentenced for 10 years. During the time she was in prison she was all alone and would usually beat the guard who was foolish enough to try flirt with her.

But during a night two years after her arrest, Miho managed to escape by strangling the guard and took his key card. By cleverly sneaking out by hiding in the laundry with fresh uniforms, she got as soon the truck drove out of the prison. Miho managed to get back home to her parents house only to find her mother has left Japan for good. Saddened by this, Miho went into depression.

One day at Miho's house, she was getting a phone call from no other than Eggman, who just failed to have a brainwashed Cyo kill Sonic, asked her for help. At first Miho asked Eggman what he wanted from her. He then tells her to try bring Sonic to him dead or alive. Miho then agreed with Eggman, promising to not fail him.

When she arrived at Eggman's base, he gave her suit and helmet with inbuilt scanner utilty belt and her weapon gauntlet. At this day, Miho was now Agent Shinu, ready to either bring Sonic in or kill him.

Shinu is a japanese mobian chipmunk who looks similar to Sally save for having lighter tone of brown fur and brown eyes, as well rougher dark blue hair. She has a purple and blue suit with metal plating on her back and green belt with yellow pouches. On her shoulders she has green shoulder pads. She covers her head and face with a purple and blue helmet with green visor and it has a orange dot in the middle between the eyes. On her right wrist she has a wristband which allows her to project any kind of weapons including a blade or shield. She also has a laser-gun with Eggman's logo on.

Agent Shinu is very clever, sly, lethal and dangerous as well very loyal to Eggman. She can be somewhat merciless when it comes to killing people and she do show remorse when she do that. It is worth to noted that during missions, Shinu is very stubborn, meaning she never stops hunting down her target. She has a greedy side as she has a thing for gold and money.

Agent Shinu has no superpowers but she got great skills in ninjutsu and judo. She also is professional in using weapons like swords or guns. With her visor in her helmet she can scan her targets and get info about their abilites, skills and powers. 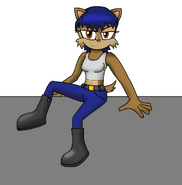 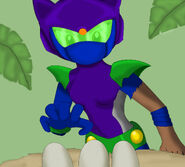 Agent Shinu stealing some dinosaur eggs on Mesozoic Island
Add a photo to this gallery
Retrieved from "https://sonicfanon.fandom.com/wiki/Agent_Shinu?oldid=1824882"
Community content is available under CC-BY-SA unless otherwise noted.