Aeonine (アオニン, Aonin) is a reoccurring character in the Sonic Monsterverse. She is the chief goddess of creation and leader of the gods. Although one of the titles, refers to her as the main important character in Goddess Generation.

Sister of All Deities 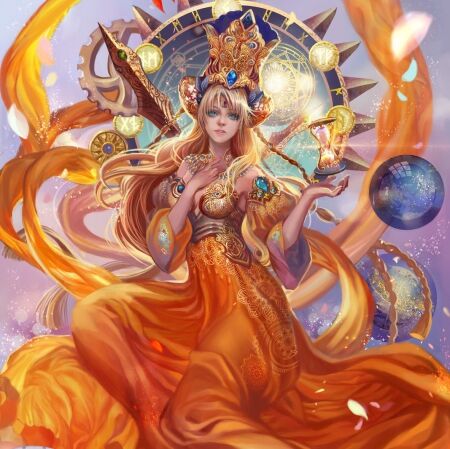 The goddess Aeonine and her dear gods were born from the mother goddess of time, stars, and sky. She starts gathering the ancients in the abyss of the nothingness, therefore to do a ritual of the creation. They created the clouds, the earth, or other terrestrials, and after all, their servants created their own kingdom to balance the good and evil. But all of that began to fall into pieces when the Black Holes invaded Terrae Gaia realizing they discovered the creations of the gods: monsters. Aeonine lead the ancients from the threat the fiends has caused chaos has taken over, taking the monsters to inner space for good.

In the first True Divine Generation game, Aeonine wears a fair white robe, silver tiara, and a transparent cape clipped with her robe

Aeonine wears a orange dress with golden, gold jewelry with sapphire gems above sleeves, along sided with a huge tall crown with resembles a theme of the sun.

Appearances in other media.

Retrieved from "https://sonicfanon.fandom.com/wiki/Aeonine?oldid=1867784"
Community content is available under CC-BY-SA unless otherwise noted.