AeonHedgehog, the author of Aeon the Hedgehog, considers this page to be unfinished. As such, some sections may change. 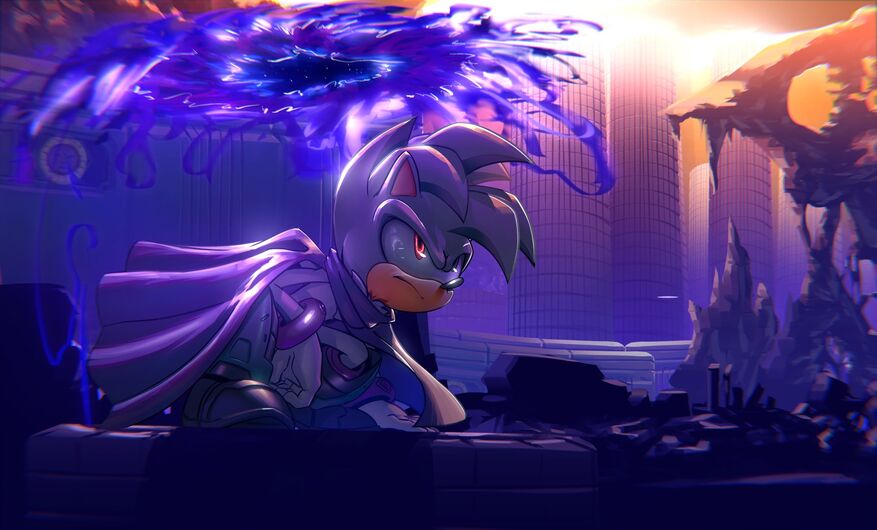 Aeon is a fan character created by Alexial Golden, for a summer school project in August of 2002. Since then he has gone on to feature in several animations, stories, video game mods, and flash games. Most notable of his appearances is the flash animation Final Fantasy Sonic X, a Sonic Generations mod created by UltimateDarkman, and a Sonic Battle mod by PlusUltra.

Aeon has an inverted quill style composed of white fur and green highlights. Due to previous injuries as a teen, Aeon has a cybernetic right eye, as well as a prosthetic right forearm/hand and prosthetic legs from the knees down. He occasionally uses a brown cloak to shield from the elements.

Aeon was once a very studious and gentle teenager, who preferred researching and learning, rather than interacting with his peers. He was very shy, and only spent time with one person. After being imprisoned in the Multiverse, Aeon's heart grew cold. Cursed with the knowledge of an infinite number of realities, which are now part of a much, MUCH larger picture, Aeon has a hard time sympathizing with the plights of individual worlds. He is obsessed with gaining power, and is unconcerned with the methods used to achieve his goal.

Aeon's link to the multiverse allows him to draw upon it as his main means of attack. This grants him the power to rip temporary holes in the space/time continuum, causing colorful rifts of energy to explode from his body and repel anything in its path.

Through his travels, Aeon obtained a crystal that focuses and stores the energy released when he activates a rift portal. He is able to fire these charges of energy through his arm cannon.

Unlike most hedgehogs, Aeon is unable to utilize the powers of  the Chaos Emeralds.

He is also able to teleport to areas within his line of sight, which enables him to battle against enemies much faster than himself.

Due to Aeon's connection to the Multiverse, upon "death", he simply returns to the void, thus granting him a semblance of immortality.

Aeon is perpetually drawn to the void between universes known as the Multiverse. It is a desolate blackness without form. By using the powers of Traverse, he is able to rip holes in the space/time continuum to visit various worlds, but is unable to maintain a permanent presence in them. Once his time is up in a particular world, he is imprisoned back in the void of the multiverse until he is able to find a new world.

Aeon grew up in a world isolated and very low in population, following the downfall of a major civilization. At a young age, while most children were playing  with wooden swords and having fun and games, Aeon was content to study the technology and the fall of the previous civilization. His only friend was an older hedgehog named Amber. The two were nearly inseparable, and spent most of their time exploring ruins that Aeon had found. Through his studies and field research, he learned of a tomb he interpreted to be that of a fallen hero. Curiosity got the better of him, and he went to explore it without Amber.

What he unleashed was an unholy hell in the form of a phantom being named Twilight. With his magic, Twilight unleashed a never ending horde of monsters and on his path of domination, destroyed Aeon's village, killing his parents in the process. Aeon tried valiantly to fight against Twilight, but was quickly and easily defeated. Rather than killing Aeon, Twilight crippled his right arm and blinded his right eye with a fire spell, and cast him aside. After the army had razed his town to the ground, Aeon spent months searching for his dearest friend, hoping for nothing more than a friendly face.

Meanwhile, the phantom had seized control of the entire world, and his tyranny immediately brought suffering and destitution to the population. Aeon, emotionally destroyed at the loss of his parents and disappearance of his beau, vowed revenge and began constructing basic cybernetics to repower his dead arm and eye.

With his newfound power and an insatiable lust for revenge, Aeon began his assault on Twilight's fortress, where the self-proclaimed ruler sat on his throne, awaiting the hero's arrival with a spell-bound Amber at his side. After tearing his way to the entrance of the throne room, Aeon heard a voice resonating within his head, offering him the power to fight Twilight. Disregarding the voice as a mind game played by his nemesis, Aeon opened the twin doors and stepped inside. What awaited him was more than he could handle.

Twilight had possessed Amber, and was using her as a shield against Aeon's relentless onslaught. Unable to bring himself to harm his only remaining friend, and devastated at the realization that she was now against him, Aeon surrendered, and received the beating of his life. On the verge of death, Aeon once more heard the voice inside his head, offering him the ability to save Amber and himself. Unbeknownst to him, he had also released another phantom entity from the tomb, and with little choice, he accepted. Soon after, a massive hole ripped in the space/time continuum, and the two hedgehogs were sucked into the void between universes, leaving Twilight free to continue his reign of terror in Aeon's world.

Aeon awoke to find himself in a perpetual darkness. Time held no meaning, and minutes turned into millennia. Amber was nowhere to be found, and Aeon found himself almost completely alone. He came to know the new voice in his head as Traverse, a phantom very similar to Twilight.

"It won't end here. I'll find you, Amber... and we'll go home together." Aeon vowed as a portal to a new world opened...

They'll Burn for What They've Done!

Amber, All Grown Up

Taking shelter in the past

Posing for the Camera!

The Readout of Aeon's Cannon Display

Aeon Awakens in the Void

Bass during the infamous fight with Sonic

Down, but not out