Only the worthy shall wield Excalibur, and that worthy is that of King Arthur. 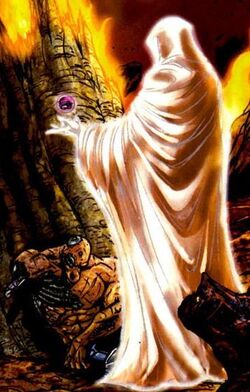 Aelos was a primordial Divine Spirit who existed during the Age of Mythology. Known to have created most Divine Constructs, Aelos is a major figure in the Arthurian Legends of the Aelian Bible, as he is the creator of both the Sword in the Stone and Excalibur.

Aelos was a primordial being who foresaw the creation of the Multiverse before his spectral eyes. Having seen space-time formed after Chaos, Aelos became a figure of creation alongside others to form Gaia to which eventually gave birth to all sorts life, including the Titans, and other magical creatures.

Aelos was worshiped by the Aeliad as the God of Creation, Life, Sun and Light. He was considered to be a major figure both Pre-Aeliad and Post-Aeliad. However, after the destruction of the Aeliad civilization during the late stages Titanomachy between the Twelbe Olympians and the Twelve Titans, worship of him decreased.

Due to the decrease in worship of Aelos, he eventually abandoned the Multiverse.

Aelos is mentioned by Samuel Hayden on a ocean cruise.

Due to being a primordial entity, Aelos is a near all-powerful being with limitations such as gaining via worship.

Omnipotence: Being a primordial being who existed before even the Multiverse and made it, he is by far the most powerful being possessing limitless amounts of power, and is only matched by Delos.

Omnipresent: After the creation of the Multiverse, Aelos is now capable of being everywhere of anywhere regardless of anything in the Multiverse, including being in dimensions locked off to everyone, and multiple timelines

Omniscience: After the creation of the Multiverse, Aelos is able to know everything of anything of the past, present and future and knows every future possibilities of each timeline.

According to sources found in the Aelian Bible, Aelos was the creator of Caliburn and Excalibur; however in the Ancient Celtic Mythology, it is said that the Celtic God Apollo was the creator.

Retrieved from "https://sonicfanon.fandom.com/wiki/Aelos?oldid=1823346"
Community content is available under CC-BY-SA unless otherwise noted.