This is an article about Aegrine the Hedgedragon, a character created by Clairebear165 on 11/19/2015. 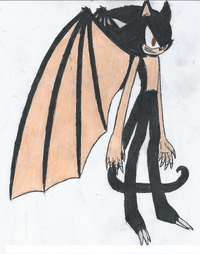 Aegrine has an appearance similar to Shadow. His fur is as black as the night, and his quills are the same shaping of Shadow's quills, except no red streaks. On his back are two large bat-like wings that enable flight, a long reptilian tail, and his hands and feet have ivory talons like that of an eagle for gripping and shredding through flesh. The inside of his ears, muzzle, arms, wing membranes and belly are beige. Aegrine's mouth is filled with razor sharp incisors and a snake-like tongue. Finally, this hedgedragon's eyes are mango and can sliten his pupils, like all hedgedragons can.

Aegrine is depicted as snarky and sadistic. He loves to mess with his enemies before killing them. An example would be if he releases his victim, let him or her get far enough to make them think they are safe, then lunge out of nowhere and murders them. Aegrine, like all hedgedragons, are carnivorous, meaning they eat other animals for food. But Aegrine takes this way too far. He is the only hedgedragon known to kill and eat humans and mobians. He also likes to insult others very often.

Aegrine had a tragic backstory. He was the son of Millerite the Hedgedragon and Stibnite the Hedgedragon. Aegrine was only about 7 years old when his father was sealed within the Vortex Crystal. He was angry and upset with Millerite for not doing anything to stop Stibinite's sealing. He ran away on the same day and was swept away by the Impitoyable River. Aegrine was only able to survive because of his instincts and the skills he was taught when he was young.

Aegrine has the power to breath blue fire, an uncommon fire color, but not even close to purple fire.

Aegrine is an expert when it comes to hiding in the dark. His black fur helps keep this hedgedragon concealed when sneaking up on his prey.

PGW Aegrine is identical to his normal counterpart except for a few differences. He is taller, his fangs are more pronounced, and he has a scar over his left eye.

Aegrine's personality doesn't change much. He has a more softer side but is still snarky and sadistic.

Aegrine is able to breath blue fire, a trait inherited from his mother.

Aegrine has minor acrobatic skills. He doesn't use them much.

Being a predatory mobian, Aegrine is able to sneak up on unsuspecting people and killing them before they even knew he was there.

Using his nose, Aegrine is able to track a bleeding animal for over five miles before loosing their scent.

Aegrine is most dangerous when in the air. Though he is more than capable with fighting on land.

If he runs out of fire, Aegrine has to eat to produce methane to be able to breath fire again.

Retrieved from "https://sonicfanon.fandom.com/wiki/Aegrine_the_Hedgedragon?oldid=1740073"
Community content is available under CC-BY-SA unless otherwise noted.