Ace the Dog is a minor character who will be mentioned in the upcoming story A Loner's Tale. He is the father of Digger and Pixie and the husband of Sara the Dog. 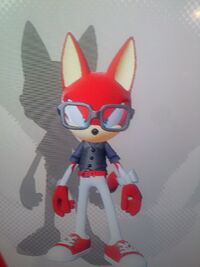 Ace is a tall anthropomorphic Dog with red fur, pale blue eyes, and white flames like his son Digger's. He wears a black shirt with a red belt, a white wristwatch, glasses, and red and white sneakers. He also has narrowed eyes that give him a constantly grouchy look.

Despite his fearsome expression, Ace is actually a laid-back fellow. He cares deeply for his family, and is very similar to Wilson the Wolf in many aspects.

A Loner's Tale: Ace does not appear, but can be heard shouting in the Prologue. He is later mentioned every now and then in Digger's thoughts. He makes his only appearance in the Epilogue when Markus tells him and Sara he's going out to look for Digger.

Rise of a Team: Ace is first mentioned by Markus when the hedgehog reveals where he, Ace, and Sara are sheltering, though Monty the Dog is rather bitter, having witnessed the murder of his own parents. Markus guides a patrol to where they live in SlugTerra, and Ace makes his first formal appearance while Monty is recovering from injuries inflicted by Infinite. He and Sara both thank Monty for helping Digger while their son was sheltering in Lamarkie Village. During the fight after the Lamarkie Standoff, Monty sees Ace attacking a Shadow clone with a shovel, his face contorted with rage.

Sara is Ace's beloved wife. They love each other dearly, though due to not appearing, the extent of this is unknown.

Ace cares for his children greatly. In the Prologue, he can be heard challenging Infinite, snarling that he won't let the masked jackal hurt his family.

Retrieved from "https://sonicfanon.fandom.com/wiki/Ace_the_Dog?oldid=1792923"
Community content is available under CC-BY-SA unless otherwise noted.