You say fish, I say filet mignon because you're just way too basic~

— Abigail teasing with her friends 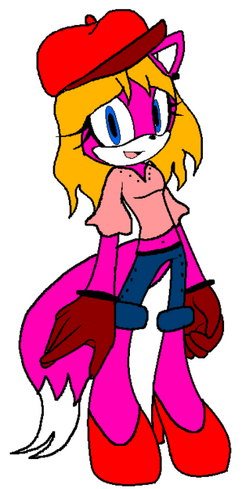 Abigail the Cat is a fan character created by Darkest Shadow. She is a girl from Alskora City, who happens to be a singer. She is a friend of Alexis's too.

Abigail Marie Piere is a 16-year-old cat from Alskora City living on 87 Ingrid Lane. She is a great singer who happens to be a popular personality on AyeTube. She has a lot of friends and usually sings the national anthem at most of her city's events. Abigail is also in the process of writing her very first song. In her free time, she likes to sing and talk with her friends.

After Abigail's AyeTube success, she decided to audition for the X Factor at 14. She came in fifth place, but a producer was interested in working with her and got her signed a label. While she still frequently posts on AyeTube, she now makes original material and is a paid artist.

Abigail is sassy and outspoken. She isn't afraid to say what she really thinks, and sometimes just won't stop talking. When she walks, she normally puts one hand on her hip, and uses slang sometimes. She makes a lot of friends and does what she wants. She also "disses" people when they "sass" her.

Abigail stands at 3'5 inches tall and keeps her weight a secret. Her fur is a shade of a deep pink color. Underneath her fur is white skin, which is also the color of her muzzle, inner ear and tail tip. There is also fur covering her tummy and arms. Her eyes are a greyish blue color, like a cloudy sky. Her eyes are separated and big with two eyelashes on each side. Her hair is blonde and goes down a little past her shoulders. Her tail is also long and bushy, which most mistake her for a FoxCat.

Currently, Abigail wears a light salmon-pink v-neck crop short thick-sleeved top with a few dots as a design on the top. Her stomach is showing too. Her stomach shows. For pants, she wears blue jean shorts with a black belt to tighten it. For shoes, she wears red heels. She also wears dark red gloves. Abigail also had her ears pierced and put black earrings in them. To complete her outfit, she wears a red hat.

Singing- Abigail's main talent is singing. She has a great voice and takes private lessons. Because of this, she seems to be really well known around her community and was chosen to go on tour and perform with the one and only Serena Stone. She loves to sing songs by many famous singers and post them on AyeTube. Lots of people subscribe to her and commenters say she has an amazing voice. She is currently in the progress of writing her very first song.

Acting- Abigail also is an actress. Her acting is amazing, and performed in a movie. It takes her a few days to get into character, but once she is used to it, she even starts making conversation using that character she is portraying as an alter ego.

Abigail has the power of rock manipulation allowing her to lift rocks no matter what the size. She can even make a rock appear  from her hand. She usually uses this in battle. She can also control any kind of rock such as rock, stone, flint, etc. etc.