You fool to fight. Pokemon can handle one Eggman robot. Maybe two. Whole squadron? No. Definitely not entire army either.

Aaron the Aggron is a character who appears in The Legend of Fox the Brave. He is an Aggron loner who led a small "clan" of refugees that later fell under the leadership of Silver the Lucario. This clan would later become Rogue Squad. Aaron is noted to be one of the strongest members of Rogue Squad, able to take knockout moves easily with his Sturdy Ability and heavy metal armor. Mega Evolving gives him the Ability Filter, which weakens Super-Effective moves against him. 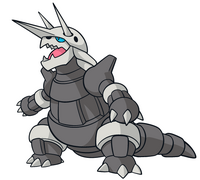 Aaron is often very grouchy and stubborn, citing "It Aggron way to not give in easy." Despite his stubborn nature, Aaron is incredibly loyal and tough. He takes no nonsense from anyone, especially trouble makers.

Silver's Mission: Aaron first appears shortly after Silver escapes the Outsiders. Silver notes him to be the de facto leader of the "clan" of Pokemon consisting of him, Rokky the Sandile, Cobalt the Houndour, Mitch the Shiny Vibrava, and Aero the Aerodactyl. When Silver learned of their story and began to encourage them to fight, especially against against Eggman, Aaron resisted this. He insisted they couldn't fight Nero, much less Eggman. Frustrated by the Lairon's stubbornness, Silver challenges him for leadership of the clan. With a Type-Advantage, Silver easily bests Aaron, and claims leadership of the clan. Aaron remains with the clan under Silver's leadership, and though he often argues with him, becomes a fierce warrior and a great asset. Soon after a mission to rescue Michael from Neo Metal Sonic, Aaron evolves into Aggron. With the newly-named tribe already having the Aerodactylite, Aggronite, and Houndoomite, Aaron has instant access to Mega Evolution.

In his base form, Aaron's Ability is Sturdy, which means he can take OHKO hits and survive easily. With this Ability, he is completely immune to attacks like Guillotine and Fissure. When he Mega Evolves, his Ability is Filter, which weakens Super Effective moves. Additionally, when Aaron Mega Evolves, he loses his Rock-Type completely.

Aaron is incredibly phyiscally strong, and defensive. Though very slow, he is capable of making up for this with his attacks. He is able to swing himself around to use his tail in battle, and can lower himself down to make himself more defensive. While a Lairon, he was able to charge forward, his iron armor protecting his head and back so he could charge without worrying about getting hurt.

As Aggron/Lairon: Aaron is 4x weak to Fighting and Ground, and is weak to Water-Type Pokemon

As Mega Aggron: Aaron is weak to Fire, Fighting, and Ground-Type Pokemon 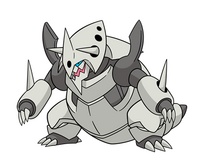 As Mega Aggron
Retrieved from "https://sonicfanon.fandom.com/wiki/Aaron_the_Aggron?oldid=1862414"
Community content is available under CC-BY-SA unless otherwise noted.